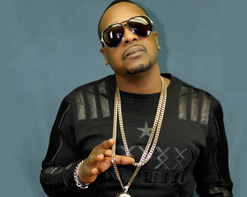 Hailing from Jamaica Queens, NY, Papa Pretty, (AKA Papa Doc), defines authentic Hip Hop entertainment. Raised in a New York City borough that is home to many Hip Hop greats such as Nas, 50 Cent, LL Cool J, and Nicki Minaj, Papa Pretty was destined to take his place amongst the great line of MC’s and entertainers who have come out of Queens. It is quite obvious in his newest video, “Let It Go,” that Papa Pretty is passionate about his music. He is an artist who is set to grasp the most success conceivable in the Hip Hop and Entertainment business. As an artist and business man, Papa Pretty understands the value of hard work and commitment. His dedication to his craft is unmatched. With its thumping bass that makes you want to drop it low and its cash-filled, affluent lyrical theme, “Let It Go” is surely a smash hit for everyone who desires a luxurious lifestyle.

Once Papa Pretty started performing throughout New York City, he began making a name for himself through his performances. With his ingenious word play and his extravagant shows, Papa Pretty took the underground music scene by storm. Deciding to stay independent, Papa Pretty released his first single, “Built For This III” featuring Uncle Murda. The single was an instant street classic, and ended up being played on New York City’s top radio stations such as Power 105.1 and Hot 97.1.  MixShow DJ’s including DJ Kay Slay, DJ Don Demarco, DJ Jovon the Last Don, and DJ Big Kap went crazy over the record and began playing it as the “streets” demanded more of this authentic sound of Hip Hop. His new sound embodies the past, present, and future of Hip Hop.

Riddled with the extravagance that the Hip Hop world yields, the video for “Let It Go” will have you twerking and making it rain to the beat of this killer tune. Filled to the brim with beautiful, thick girls with ample backsides dancing for Papa Pretty, with the help of brilliant Director Shatek and Hood Royalty Management, this video is a rhythmic, visual experience. You will be hard-pressed to find a more representative video of the high-life and pure Hip Hop lifestyle that is represented in this video. With lavish cars, tons and tons of cash being spent without a worry, and style not to be messed with, this video lives up to the song’s title, “Let It Go.”

Here at HIP we are always stoked to be working with new artists who prove to be great attributes to the world of music. If you need more info, call Andy Gesner at 732-613-1779 or e-mail us at info@HIPVideoPromo.com. You can also visit www.TheRealPapaDoc.com for more info on Papa Pretty.