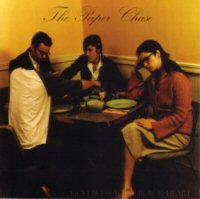 Happy Summer everyone! It’s Andy Gesner and the staff from HIP Video Promo, here to call to your attention another sensational video from an emerging group completely worthy of your attention. We’ve sent you videos before that could be described as macabre, and others that are cryptic and disturbing. But it’s fair to say that we’ve never before shared a clip quite as unsettling and bewildering as the new video by The Paper Chase. Borrowing imagery from psychological horror films and pure nightmare visions, and displaying that imagery with the chilling clarity of documentary realism, the “Said The Spider To The Fly” video is one of the most remarkable, memorable clips we’ve seen in a long time.

But you wouldn’t expect anything less from The Paper Chase. The Dallas, Texas act has made a reputation for being uncompromising, ruthlessly intelligent, and constitutionally unusual. God Bless Your Black Heart – the group’s third release, but their first for Kill Rock Stars – extends the band’s well-known explorations in all directions at once. It’s a wild swirl of piano, synthesizer, toy xylophone, and strings, all resting precariously atop a rock rhythm section that slams away like a piledriver. Singer John Congleton’s voice may be sweet and direct, but his subject matter is anything but: it’s dense, complex, excoriating, rife with vivid and disconcerting imagery. This is a group audacious enough to cover “Go Fishing”, Roger Waters’s epic narrative of betrayal amidst the pines, and make it continuous with their own twisted tales of relationships gone wrong.

“Said The Spider To The Fly”, the lead single from God Bless Your Black Heart,is typically disorienting and incendiary, but it somehow manages to weld a singalong chorus to a truly demented pop arrangement. The Paper Chase loops an off-kilter piano riff over a relentless string section, spikes the brew with distant hollers and sound effects, and pinions the treble instruments to an insistent, pounding rhythmic backdrop. Congleton dances on the brink of hysteria, but refuses to shout – even when his metaphors get downright ghoulish, he maintains a boy-next-door charm that’s impossible to deny. (And that’s probably the scariest thing about him!)

The cover of God Bless Your Black Heart finds the group nonchalantly sitting around a table with a headless human. The clip for “Said The Spider To The Fly” takes its cues from the album cover: at least half of the characters in the video have quite literally lost their heads. Regardless, they proceed with daily activities – having dinner, playing the violin, dressing to go out, posing cross-legged on a living-room couch. The headless persons express themselves through unmistakable body language and proxemic cues, and their compatriots treat them as they would any complete person. Elsewhere, alone in a dark room, Congleton addresses the camera, and swings his arms maniacally like Michael Stipe in the “Losing My Religion” video. Is he steadying himself against the force of his own personal gravity, or is he trying to take flight?

Crosscuts come fast and furious, and narrative threads are spliced together at a terrific clip. Throughout the video, a man trapped in a casket – and about to be buried alive – bangs vainly on the lid. His pallbearers take no notice, and the decapitated preacher seems incapable of response. Meanwhile, at a dinner party fraught with surreptitious glances and bizarre come-ons traded with headless guests, the hosts make ugly lacerations in an unidentifiable main course. Silhouetted spiders crawl over the frames, and a headless string quartet saws away at their instruments, oblivious to Congleton’s ranting. The clip closes with the coffin lowered into the earth, its desperate occupant clawing lamely at the wood and earth that surrounds him. The video goes to black with the grim finality of a slamming door.

It’s worth noting that the decapitated humans are among the least violent and disturbing elements in this video: there doesn’t seem to have been any trauma involved in removing their heads, and these characters seem as resolute and capable as any of the others. In fact, it’s the people who do have heads who seem the most distressed, and the most jeopardized – including Congleton himself.

We should also note that Kill Rock Stars has been one of our favorite indie labels for many years and it a great honor and privilege to be able to work with the legendary Slim Moon and the ultra cool folks at Kill Rock Stars. This Olympia, Washington based label is the home to Sleater Kinney, The Decemberists and has some of the greatest names of bands out there (Amps for Christ and John Wilkes Booze, to name a few). Slim and the KRS crew along with all of us here at HIP are prepared to meet your Paper Chase needs in a timely fashion. If you need more info call Andy Gesner at 732-613-1779, or email info@HIPVideoPromo.com.You can also visit www.KillRockStars.com to find out more about The Paper Chase.