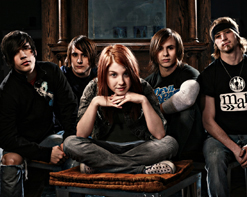 Greetings once again to all my fellow music video fanatics! It’s Andy Gesner and the staff from HIP Video Promo with another must see video. It’s been our great pleasure to work with our friends at Fueled By Ramen to help spread the word about the talented pop-punk groups on their roster. FBR bands are self-starters: they’ve each proven that they can draw attention to their music on their own. Groups invariably come to the label with an already rabid fanbase, often generated by new media and online hysteria. Paramore is no exception. On YouTube, scores of fans have posted footage of the group’s energetic live show, and others have shot their own films to accompany the quintet’s music. Paramore songs have been streamed more than a million and a half times on MySpace. Relentless touring has turned thousands on to All We Know Is Falling, the band’s heralded debut. The band has already achieved so much through their own initiative – and frontwoman Hayley Williams is only seventeen years old.

It has helped that the Franklin, Tennessee quintet is so easy to look at: Williams is a young red-haired star, and her bandmates have a rough, photogenic charm. Before the camera, the five members of Paramore are naturals – they’ve already learned the art of angled glances and pregnant stares. Away from the lens, they’re just as compelling to watch. Paramore have been regulars on the Warped Tour, and have shared stages with Simple Plan, Halifax, and Bayside.

Produced by James Wisner (Dashboard Confessional) and Mike Green (Yellowcard), All We Know Is Falling was anointed one of the best underground releases of 2005. SPIN magazine praised Williams’s singing, The New York Times listed Paramore among the most underrated bands in the country, and MTV invited the group to appear in a “You Heard It Here First” segment. Elsewhere, Electronic Arts Games chose “Pressure”, the fierce first single from the album, for inclusion in the second installment of the bestselling Sims series. This summer, an acoustic Paramore cover of the Foo Fighters “My Hero” will be included on the companion soundtrack to Superman Returns.

Shot in an abandoned warehouse, the video clip for “Emergency”, the latest Paramore single, plays with conventions and expectation. We’re shown the bandmembers bloodied and bruised, as if they’d been in a dust-up. A radiant Hayley Williams sits on a couch, anticipatory, maybe a little cautious, looking suggestively out at the camera and at the other members of Paramore. Behind cuts and bruises, they stare back. Then, another enters the room like a romantic hero, and casts a single red rose in Williams’s lap. Is this a strange, mutant courtship scene; cowboys on some industrial frontier vying for the hand of a beautiful young maiden?

We find out when Williams stands up and follows him to the outside of the building. Here, a film crew has set up their equipment. Cosmetologists paint fake blood onto the faces and the knuckles of the bandmembers; Williams herself gets a “cut” on her forehead. The veil of narrative is lifted, and suddenly we recognize we’re at a shoot, and the musicians of Paramore were simply waiting to be called by the director. It’s a nudge and a wink in the direction of the audience, an invitation backstage, and an indication that some of the suffering so prevalent in music videos is meant to be seen as symbolic. That’s entertainment – and above all things, this is an entertaining band.

Paramore and all of the great Fueled By Ramen artists are being brought to you courtesy of John Janick and all of the good folks at this standout label. You can catch Paramore teaming up on tour this summer with labelmates Cute Is What We Aim For in what is sure to be one of the hottest tours of the summer. Don’t miss your chance to interview these awesome bands when they come through your markets! We also have plenty of copies of All We Know Is Falling for your on-air giveaway needs. If you need more info, call Andy Gesner at 732-613-1779 or e-mail us at info@HIPVideoPromo.com . You can also visit www.Paramore.net to find out more about Paramore.