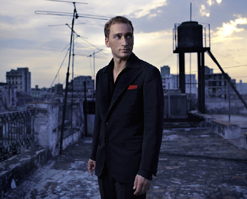 Greetings and summer salutations to all my friends in the music video community! It’s Andy Gesner and the tireless staff from HIP Video Promo, here with a brand new clip from an international musical legend. Paul Van Dyk is recognized as one of the world’s foremost club producers – a man who has transformed every cut he’s mixed or remixed, and who never fails to move the crowd. In the Nineties, he was the undisputed godfather of the trance and progressive trance movements; subsequent releases have shown that his is a talent too large to be confined by one genre. Since the release of his epochal 2001 set The Politics Of Dancing (complete with a self-penned – and persuasive – essay about the sociological implications of youth culture), he’s tried his hand at house music, world music, and even pop crossover, and succeeded at every one of his excursions. With his new album In Between, out August 14th on Mute, Van Dyk reached #2 on Billboard‘s Top Electronic Albums and Top New Artists charts and #1 on iTunes Top Dance Albums Chart.

In Between proves that Van Dyk’s heart remains in the clubs. “White Lies”, his latest single, could be a contemporary pop number – but there’s no mistaking that huge dancefloor beat. American clubgoers have taken to it already; the song hit #1 on the Billboard Top Dance Singles chart, was a Top 10 Soundscan single, and is currently storming its way onto mainstream playlists. There are plenty of mesmerizing progressive-trance tracks on In Between – but the set is marked by several dazzling collaborations. Ashley Tomberlin of Luminary appears on several cuts, Rea Garvey of chart-topping German band Reamonn sings on the gorgeous “Let Go”, and the set culminates with a guest performance by David Byrne of Talking Heads.

There’s a pretty famous set of pipes on “White Lies”, too. The single features singer and actress Jessica Sutta – best known as the “Pin-Up” girl in the Pussycat Dolls. Sutta’s sultry voice has become quite an in-demand commodity in pop and dance music circles recently: Kanye West signed her up to contribute vocals to Graduation, and she also graces Dave Audé’s latest club singles. On “White Lies”, she channels Madonna at her most forthright and seductive, and proves she can go toe-to-toe with Van Dyk’s mammoth backbeat.

Fans of urban music may recognize Sutta from work she did long before she was selected to join the Pussycat Dolls – she’s appeard in clips by Will Smith, Beyoncé, Gloria Estefan, and many others. She’s a powerful physical presence in front of the camera, and her dancing is simultaneously vigorous, graceful, and unashamedly sexual. The “White Lies” clip pairs her with a director she knows well – Steve Antin, the creator of the reality television show that assembled the current lineup of the Pussycat Dolls. (Antin has also directed the sequel to thriller The Glass House.) The director imagines Sutta as a performer in a futuristic burlesque: first, dressed in white, she dances atop a large and inviting bed, and later, she executes a stunning choreographic sequence on a single black chair. Slots appear in the red walls ringing the set, and male and female patrons of the theatre watch her as she gyrates. Periodically, the camera pans back, too – and there’s Paul Van Dyk, comfortable and in control behind his decks, providing the musical accompaniment to this scene of erotic provocation.

Mute Records has done it again and we couldn’t be more excited about having this opportunity to work together. Here at HIP we realize you’ve come to expect the best in indie rock, hard rock, and especially artists that light up the dance floor all across the country! Getting to work with Paul Van Dyk is a huge thrill for us since we know he’s at the top of the heap when it comes to this kind of musical aesthetic. Please let us know if you’d like to secure some copies of In Between for your on-air giveaway needs. If you need more info, call Andy Gesner at 732-613-1779 or e-mail us at info@HIPVideoPromo.com. You can also visit  www.Mute.com, or www.PaulVanDyk.com to find out more about Paul Van Dyk.