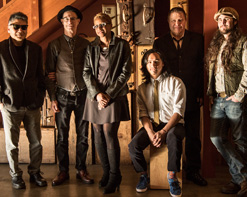 Paula Boggs is one of the most talented and distinguished personalities to ever grace the HIP Video Promo stage. Coming out of the world of academia with degrees from both The University of California Berkeley School of Law and Johns Hopkins University, Paula Boggs Band has established itself as a force of enlightenment in music. Wielding a heart of gold and speaking in the language of sweet indie melodies, the band pushes forth with their newest video,“Holocene,” in their mission to empower the masses with the most valuable tool of all: Soul.

After serving as a U.S. Army Airborne Officer, Boggs became a federal prosecutor, a partner at the law firm Preston Gates & Ellis, a vice president at Dell Corporation, and Starbucks Corporation‘s top lawyer, before and while embarking on the now ten year musical journey that is the Paula Boggs Band. Having lived several lives within this one, Boggs and her band have many stories to tell through music, sharing their talents with a global audience through mostly original lyrics and melody.

In recent years, Boggs founded Boggs Media LLC, the business managing her music, speaking, and other creative business activities. Since the creation of Boggs Media LLC, Paula Boggs Band has released two full-length studio albums featuring singles, “Carnival of Miracles” and “Look Straight Ahead”. Their third full-length studio album entitled Elixir – The Soulgrass Sessions, releases on September 15th, 2017, and we at HIP Video Promo are honored to showcase the Paula Boggs Band’s new video for “Holocene”, a track from the new album.

“Holocene” is a song originally written by Justin Vernon of the band Bon Iver. Paula Boggs Band takes this already beautiful, atmospheric song and brings their homegrown Soulgrass sound to the forefront. The “Holocene” video shines light on the band’s roots music talents, and their use of modern dance in the video enhances their mission to entertain while also promoting self-reflection.

Here at HIP Video Promo, we’re very excited to bring you another beautiful video by the Paula Boggs Band. Their commitment to making the world a better place inspires us, and their ability to do so in such a satisfying musical sense is brilliant. We would love to hook you up with anything Paula Boggs Band related, so please get in touch! You can contact Andy Gesner and the HIP Video Promo staff at (732)-613-1779 or email us at info@HIPVideoPromo.com or visit www.PaulaBoggsBand.net for more info on Paula Boggs Band.