Peaches “Set It Off” 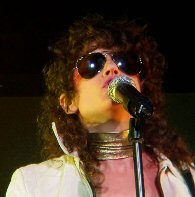 Peaches has big, deep, blue eyes. You probably wouldn’t know that, because she keeps their keen gaze under tough girl aviator shades. She makes, mixes and mutilates her own music. She is the kind of woman who could eat you for breakfast. Produced and recorded entirely by Peaches herself, her new CD The Teaches of Peachesfuses the nihilist gutter-tronics of Suicide with the carnal knowledge of a wanton hussy. Imagine an amalgamation of the low rent love-core musings of Lydia Lunch blending with the ballsy vocal aesthetic of Chrissy Hynde. The CD has thrilled critics and club patrons all over Europe, becoming a fave at fashion shows (“everyone in Fashion digs Peaches”), house parties, fetish scenes and intimate soirees.

Huge thanks to Lesley Bleakley and Matt Harmon at Beggars for allowing us to be a part of a video promotion campaign involving such an up and coming underground diva (Peaches just finished opening for The Queens of the Stone Age during their US tour and is currently on the Electro-Clash tour with Chicks On Speed). Born in Canada and now living in Germany, Peaches is not necessarily all about the warm and fuzzy, she is more about being shocking and irreverent. The video for the song “Set It Off” is a must see clip, despite the certain R rating the clip will be tagged with.

What else is in the teaches of Peaches? Peaches is teaching us what we already know, but most of us are reluctant to admit even to our close friends…music is about sex. OK, so music, like sex, can be sacred, subtle and sublime; but most musicians, like most people in this day and age, are ill-prepared to appreciate, let alone perform, either one in a manner that is sacred, subtle or sublime. Enter Peaches.

This is music stripped to pure sexual energy…the fact that the rhythm, the pounding essence, is supplied by an electronic device (her trusty Roland 505 groovebox) only serves to narrow the focus of the erotic spotlight to Peaches herself, where it rightly belongs. Like the nucleus of a pheromone cell or the eye of a hurricane, she is both the source and the focus of an enormous and potentially dangerous energy. (In fact, if the meteorologists get that far along in the alphabet, don’t be surprised to hear about the landfall of Hurricane Peaches) It’s easy to say she’s heir to the riotgrrrl tradition, but that’s too narrow. There’s none of that anger here, just all of the energy, spilling out of loud, torrid, and minimal magenta underwear.

The Teaches of Peaches remixes have been flying all over the place. “Set It Off” has spawned numerous remixes. To date, the following people have all done it to Peaches: Kid606, DJ Assault, Tobi Neumann, Punkers, Arthur Baker and Soulwax/TooManyDJs. Peaches, meanwhile, has done it to these people: Basement Jaxx (with a completely new rap) and Jeans Team (in a ZZ Top style).

Peaches is a throbbing union of one machine and one woman’s libido: a sweat-beaded confection of primal electro-sound and DIY punk attitude. And you know what? It’s driving people wild.