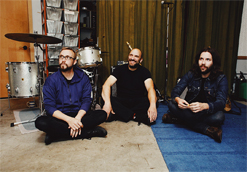 In August 2016, during what he now recognizes as his lowest point, David Bazan was touring the country alone in an aging minivan and found himself in his hometown of Phoenix, AZ. In need of a break from the road, he spent a night off at his grandparents’ house. Before leaving town the next morning, Bazan gave himself the gift of a quick detour past the house he grew up in, and experienced a breakthrough – one that would lead him both forward and back to another home he had built many years before.

Bazan recorded and arranged all of the skeletal accompaniments for his obsessively introspective lyrics and spare melodies for Pedro The Lion. Each player would then learn their parts and, together as a band, they brought the skeleton to life. While bandmates played on a few recordings, Bazan often played all or most of the instruments himself.

By 2002, after recording Control, the high rate of turnover in the band finally caused Bazan to ditch his “natural process” in favor of a collaborative writing process. When this move did nothing to stabilize turnover, Bazan was perplexed. In November 2005, Bazan decided to stop doing Pedro the Lion altogether. For the next decade Pedro the Lion felt off limits, even forgotten, like a childhood home Bazan had moved out of.

“I had abandoned my natural way of working in the hopes of creating space for a consistent band to write with…and it hadn’t worked. So I got a rehearsal space and really leaned into my original process again. Before long I realized it also felt like Pedro the Lion.”
In June 2018, with Bazan on bass, vocals, and arrangement writing, Erik Walters on guitar and backing vocals, and Sean Lane on drums, Pedro the Lion went into Studio X and Hall of Justice with producer Andy Park to create Phoenix, the first new Pedro album in 15 years.

The result is a twisting, darkly hopeful introspection into home and what it means to go back, if you ever can. It is rock and roll wrapped in tissue paper, its hard edges made barely soft. Every melody is careful, a delicate upswing buoyed by guitar lines that hold each tender feeling together like string before ripping them apart to see what’s inside. It is an ode to the place he still loves despite how alien it can appear to him now.

The “Quietest Friend” video is an artistic experiment that pays off in a big way. It’s a natural extension of the “Yellow Bike” video, with similar stylistic execution and characters. Director Jason Lester shot the entire video on 16mm film, relying on good old cinematography skills and top notch production skills to create a haunting, introspective clip.

The video begins with Bazan pulling up to a dated Southwestern motel, chock full of tacky decor and dusty carpets. He wanders the halls underneath flickering lights, clearly hunting for something. Or someone. A little boy mysteriously rides a bicycle through the halls like a ghost from a past life (see “Yellow Bike.”) David also encounters another familiar face in the halls; himself. He may have come back to this place to confront his past, but it seems like his present self still has something to say about it all.

Please be sure to get in touch with us here at HIP Video Promo to let us know what we can do to help get this video into your programming. Pedro The Lion is a huge favorite here and we’re eager to get this big exposure. Catch Pedro The Lion on tour this spring and please let us know if you’d like a copy of Phoenix for your listening enjoyment. Call Andy Gesner at (732)-613-1779, email info@HIPVideoPromo.com, or visit www.HIPVideoPromo.com, www.PolyvinylRecords.com, or www.PedroTheLion.com for more information on Pedro The Lion.