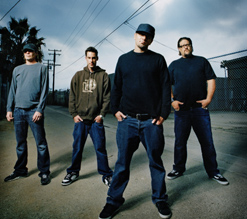 Hello punk rockers! It’s Andy Gesner and the staff from HIP Video Promo, here with an exciting new video from an enduring, pugnacious Cali punk rock group who’ve always had fighting words for the complacent and the conciliators. Other bands may change their sound or chase easy commercial success, but Pennywise has stood true to their punk principles for more than a decade. Now, in mid-2008, their faith has begun to pay off in spades: for the first time, they’ve placed an album in the Billboard Top 100, and “The Western World” reached #22 on the Modern Rock charts. Not bad for a bunch of inveterate rebels whose best-known song before the release of Reason To Believe was titled “Fuck Authority”.

“The Western World” is no letup: it’s a condemnation of tabloid trash and contemporary media, and the members of Pennywise implicate themselves in the American idiocy. In vivid imagery, thuggishly-articulate frontman Jim Lindberg howls at those responsible for the dumbing down of American culture: “This is evolution’s rise – the feeding frenzy of the uncivilized”, he howls, “the paparazzi parasites and the vultures can’t stop feeding.” As always, Pennywise stands arm in arm with the national “trash” – the “steroid boys and the video girls” – and announces his intention to keep fighting until there’s nothing left worth fighting for. It’s bracing, and poetic; it’s a punch to the gut; it’s an adrenaline mainline; it’s punk rock at its purest and best.

The clip for “The Western World”, too, is a naked celebration of punk principles. Pennywise specializes in tearing down pretensions – so a fashion show is a perfect setting for their stinging critiques. On the Pennywise runway, the models aren’t even real girls: they’re androids assembled in a laboratory by male scientists (in a ghastly laboratory lousy with dental implements and suspicious-looking x-rays), and set loose to entertain other wealthy men. The “band” playing the fashion show, too, is made of interchangeably-robotic supermodels, each one sporting a sharp blond bob and a revealing dress. They’re male fantasies animated for other men, played out in front of audiences drunk on their own testosterone. Outside the arena, another gang of angry men – the police – turns their nightsticks on the rowdy crowd clamoring to get in.

But sometimes even a fantasy achieves a kind of autonomy of its own. Sprung from the confines of the runway and the research laboratory, a disgusted android-model discovers the members of Pennywise, bound and gagged by gaffer’s tape, and imprisoned in a backstage studio. They’d had another “encounter” with the authorities, it seems, and they’ve been temporarily silenced. In solidarity, the fabricated young woman sets them free – and they take the stage in the place of the manufactured band. As Lindberg takes the microphone and delivers the incendiary chorus, the punk rock kids stream into the auditorium. It’s a takeover by the dregs, the condemned, the cast-out – and it feels great.

It’s our huge pleasure to have the opportunity to work with Danny Ornelas and the folks at MySpace Records to bring you this hard hitting new video. They’ve also set us up with copies of Reason To Believe for your on-air giveaway needs. Did we mention Pennywise is also touring the US this summer? If you’d like to set a video interview when they are in your market, please drop us a line! If you need more info, call Andy Gesner at 732-613-1779 or e-mail us at info@HIPVideoPromo.com.