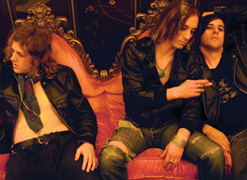 Hello my rock and roll loving programmers! It’s Andy Gesner and the staff from HIP Video Promo, here with an exciting clip from a straightforward, glamorous, and bruising rock band from Southern California. Oh, you thought they didn’t make those anymore? People are here to prove you wrong. Venice Beach and The Strip are going as strong as ever, and this incendiary trio is part of a brand new generation of sharp-sounding (and sharp-dressed) heavy bands. And indebted as they are to The Crüe, L.A. Guns, and the rest of that famous generation of Angeleno musicians, their sound also echoes that of the earlier generation of glam rockers who first put The Strip on the map in the mid-Seventies. What’s more, they’ve teamed up with one of the producers who defined the hard rock sound of the Nineties – Dave Jerden, who has made records with Alice In Chains, Jane’s Addiction and many other twisted luminaries. With Jerden’s guidance, People has developed into one of the most popular bands in Los Angeles, lighting up storied stages (Troubadour, The Roxy, The House Of Blues), and thrilling audiences with their anthemic, immediate, and radio-ready songs.

They’ve overcome their share of adversity to get here, too. The untimely passing of bassist Gidget Gein – well-known for his role in the first iteration of Marilyn Manson – forced the combo to cancel their first national tour. The raucous Gein was (and still is) a guiding spirit for the band, and his loss was deeply-felt by guitarist and bandleader Jimmy Young. But a group this talented doesn’t derail easily. We’re thrilled to report that People has regrouped, they’re stronger and tighter than ever, and America will get that national tour later in 2009. It’ll be in support of The Cliché, their upcoming full-length, and “The Kids”, the furious, infectious single. “The Kids” is People at its best: pounding drums, lacerating guitar, gold-plated riffs, a defiant, establishment-challenging lyric, and an impassioned performance by Young. “You can’t tell us how to live”, sneers the frontman, before punctuating the singalong chorus with a shout. If it all feels more than a bit like a wild rock concert, there’s a reason for that: Dave Jerden sought out to capture the raw energy of People in action, and “The Kids” demonstrates that he’s succeeded.

People is a young band, but they’ve already shown a commitment to rock video rare among newcomers. “The Kids” is the group’s first single, but it’s their second clip — they’ve already shot one for the surprisingly-funky “Song For The People”. The “Song” video is glossy, sleazy, sexy: everything we’ve always loved about spots from Los Angeles. The clip for “The Kids” has sex appeal, too — especially if you appreciate girls in uniform — but it follows a headier blueprint. Here, the bandmembers are cast as insurrectionists, inspiring a group of hooded teenagers to take to the streets. As Jimmy Young howls out his protest, his flashlight-wielding devotees poster walls, scale chain-link fences, and run from the authorities through the streets of late-night L.A. And just in case you’re wondering if People have misplaced their priorities, rest assured that there’s plenty of footage of a scantily-clad female dancer under a strobelight. On The Strip, every act of sexual provocation is a political one — and vice versa.

It’s a huge pleasure for us to be working with Peter Simon and the PAS2 Productions crew! They’ll be hooking us up with a bunch of copies of The Cliché, so please drop us a line to get your hands on some copies for your giveaways. If you need more info, call Andy Gesner at 732-613-1779 or email us at info@HIPVideoPromo.com.