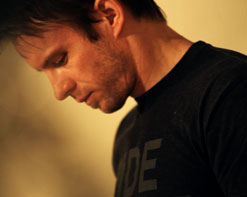 Greetings programming friends, it’s Andy Gesner and the HIP Video Promo crew bringing you a breakout video from an act many years in the making. Some might consider Ralph Klisiewicz to be a bit of a musical late bloomer. It wasn’t until his freshmen year at college that he began learning piano (as well as guitar and producing) and then even took a ten year break after being frustrated by the lack of affordable musical gear available to musicians in the late 90’s. But like his appropriately named solo project, Perpetual Process, the bug inevitably bit Ralph again after seeing a video online and realizing that the musical plugin revolution had come full force and that the everyday musician suddenly had a wealth of musical resources available to him at an affordable budget! What was initially assumed to be a hobby purchase eventually grew into a full blown addiction.

Ralph had always had a strong fascination with the synthesizer and the way it is able to manipulate sounds and create layers. Many of his influences are apparent on the self produced new album titledMake It Easy, with everything from Massive Attack, Nine Inch Nails, Pink Floyd and Everything But The Girl lending an influence to the sound. In order to maximize the lush sounds and layers on Make It Easy, Klisiewicz enlisted fellow Chicago resident and talented blue-grass singer Sarah Holtschlag to perform on 6 of the songs on the album. Sarah is gifted with a warm and charming voice and it was a perfect match for the music of Perpetual Process. All of this is possible because of the advancement of technology that has made recording an ever more affordable opportunity for artists.

In addition to recording music, the cost of making a standout music video has also come down to earth so that an artist like Perpetual Process can be afforded the luxury of putting a strong visual to their music. In the new clip for “Tioughnioga” (pronounced tei-uhf-nee-O-guh) directors Mariusz Falkiewicz & Marcin Murawski have carefully crafted a moving portrayal of a man (played by Klisiewicz himself) who is down on his luck after a rather unfriendly performance evaluation, finds himself without a job and is left to ponder where things went wrong. Overlooking the vast and dominating Chicago skyline from his rooftop residence, he finds his solace by immersing himself in his music, and the lyrics of songs offer the opportunity to move forward with his life and to send his problems “down the Tioughnioga.” It’s an effective reminder that life isn’t always easy and that tough choices have to be made, but as long as we are able to find our own sense of solace (this one being music) that we there is almost nothing we can’t overcome.

We’re all very excited to be working with Perpetual Process and to help bring you this lush and insightful new clip. We’d love to hook you up with anything you may need to be able to get “Tioughnioga” into your video programming, including copies of Make It Easy, so please don’t hesitate to be in touch and let me know what we can do to make this happen! If you need more info you can also contact Andy Gesner and the HIP Video Promo crew at (732)-613-1779 or email us at info@HIPVideoPromo.com . You can also visit www.PerpetualProcessMusic.com for more info on Perpetual Process.