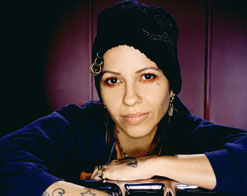 A big warm hello to all my programming friends! It’s Andy Gesner and the staff from HIP Video Promo. Today, it’s our great pleasure to re-introduce you to an artist who you surely know well, even if you don’t think you do: Linda Perry. Over the past few years, the former singer of Four Non-Blondes has emerged as possibly the hottest commercial songwriter in America. The list of blockbuster smashes penned or co-written by Perry is jaw-dropping: Pink’s funky “Get This Party Started” and “Lonely Girl”, Christina Aguilera’s smoldering “Beautiful”, Gwen Stefani’s day-glo “What You Waiting For?”, most of Courtney Love’s blistering America’s Sweetheart, and many, many others. ASCAP recently honored Perry for her achievements, but she hardly needed the validation. If you’ve got a radio, you know her work.

Perry’s initial foray into commercial songwriting – all the way back in 1992 – showcased her flexibility and the power of her gigantic voice, and, in “What’s Up?”, netted her a huge hit. At a time when women were not exactly welcomed on rock radio, Perry blew down the doors with a track that was simply undeniable. “What’s Up?” was the sort of instant classic that never exactly left the airwaves: covers and dance remixes attest to its staying power. But Perry did not stay in Four Non Blondes. Her spirit was restless, and her ambitions were broader.

With In Flight, Perry realized those ambitions. The debut solo album, recorded in 1995, is a scalding set of passionate, intensely confessional pieces – some self-critical, some meditative, and all delivered with soulful, gale-force vocal intensity. Some extremely talented friends contributed to the recording, including Church guitarist Marty Willson-Piper and fellow San Franciscan Grace Slick. But In Flight is Perry’s spotlight moment – and she makes the most of it, singing these artfully-constructed roots-rock songs with a potent mixture of precision and abandon. Current interest in Perry’s work has compelled the Kill Rock Stars crew to re-release In Flight, and to share its treasures with an entirely new generation of listeners.

KRS is also reviving the two clips shot for the singles from In Flight. They show Perry at her best, performing her songs with a joy and sadness instantly recognizable and believable. The video for “Fill Me Up”, a remarkably frank song about the consequences of alcoholism, finds Perry before the piano in a plush, comfortable studio. There, her fingers find chords on an instrument that looks majestic at first blush. Later, we realize that all isn’t what it seems: the piano is missing several black keys. As a zodiac wheel spins on the far wall, Perry addresses the camera with a rueful smile. The piano literally fills up with water, and becomes a fish tank; goldfish swim through the shallow water as the singer strikes the keyboard.

In the “Fill Me Up” clip, Perry is alone; wrestling her demons without outside help, the wheel of fate as her only companion. But in the Stephen Ashley Blake’s celebratory video for “Freeway” she is surrounded by friends onstage, and broadcasting her thoughtful message to an appreciative crowd on Haight Street in San Francisco. The clip is washed with yellow and blue filters, and the effect, while hardly nostalgic, is reminiscent of footage of the psychedelic parties held in Haight-Ashbury during the Sixties. A fitting association for a thoroughly modern songwriter who has always been unafraid to draw on the past.

Here at HIP we are very excited to be teaming up with the folks at Kill Rock Stars and Custard to be bringing you these two great clips from producer extraordinaire, Linda Perry. Linda will be touring throughout the fall in support of the In Flight CD, being released on October 11th. If you’d like to see her perform live, or would be interested in setting up a video interview, please get in touch and we will take care of all the details. We also have plenty of copies of In Flight to satiate your Linda Perry needs! We hope you agree that this is an artist that needs to be re-introduced to a whole new generation of music lovers. If you need more info, call Andy Gesner at 732-613-1779 or e-mail us at info@HIPVideoPromo.com. You can also visitwww.KillRockStars.comto find out more about Linda Perry.