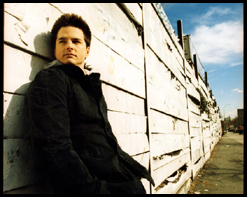 Hello to all of my terrific programmer friends, it’s Andy Gesner and the staff from HIP Video Promo, bringing you a terrific new video from an artist that we are incredibly excited about having the opportunity to share with you. Here at HIP, we’ve had the privilege to work with all kinds of artists – but it’s no secret that our hearts are with the real independents. It’s true: the surest way to win our respect is to demonstrate a commitment to the D.I.Y. ethos. On that score, few come ahead of Pete Francis. Once a third of Dispatch – one of the most notable true independent acts in pop music history – Francis has built his solo career on the same relentless, resourceful D.I.Y techniques he learned with that storied Massachusetts band.

Although Dispatch’s excellent albums were eventually re-released by a major label, they were all initially pressed by the band’s own Bomber Records. Through touring and merchandising, Francis and the band sold thousands of copies of these albums without relying on any help whatsoever from the music industry. At the height of the group’s fame, they were popular enough to launch a scholarship program for Zimbabwean children – and The Elias Fund has since grown into an internationally-recognized nonprofit organization. The band’s farewell show was at the Hatch Shell amphitheatre in Boston – chronicled in Fabrication Films’s The Last Dispatch concert ever held, and it cemented Francis’s status as an underground hero. It didn’t hurt that over 110,000 fans from all around the world showed up! The band also came together once again in 2007 for three consecutive sold out at shows at the legendary Madison Square Garden! These are all accomplishments that have never come close to duplication by any other independent act.

Largely ignored by critics during their heyday, Dispatch has since been “discovered” and fully rehabilitated by rock writers. By the time Pete Francis began releasing solo records, the cognoscenti had caught up with his excellent songwriting, smart lyrics, inventive guitar playing, and winning, conversational singing. Francis’s albums have been warmly received by fans and critics alike; 2004’s infectious Good To Finally Know topped many year-end “Best Of” lists, and the accompanying tour established Francis as a concert favorite in his own right. Iron Sea And The Cavalry, his upcoming release, builds upon the many successes of his prior work – the pop songs here are intimate, confessional, occasionally heartbreaking, and invariably memorable. Most crucially, the entire set crackles with the same defiantly-indie electricity that has always animated Francis’s project.

Pete Francis may be a New Englander by birth, but he’s spent plenty of time in the five boroughs; these days, he makes New York City his headquarters. His love of his adopted home is placed front and center in the dazzling, hypnotic clip for “Shooting Star And The Ambulance”. Francis sings his song under the span of the Brooklyn Bridge (well-acquainted as he is with the symbolic power of outdoor performance), and, using some very adventurous editing effects, actually allows the electricity of the city to pass through him. Footage – shot from a moving vehicle – of recognizable city streets accompanies the shots of Francis and band in performance; later, the lights of streetlamps, storefronts, and automobiles in motion are superimposed over the musicians. In one memorable shot, Francis’s silhouette becomes the frame for a motion-shot of a busy urban thoroughfare. Electricity streaks over his guitar; light, jumping and wiggling like sound-waves, dances around the drummer’s brushes. New York’s energy (literally) becomes lightning in the sky behind them – as the Manhattan streets possess the musicians, inspire them, bring them to life.

It is a true pleasure for us to be working in tandem with Rob Abelow at Roll Call Enterainment and the Scrapper Records crew to bring you this enticing new clip. They’ve been kind enough to set us up with lots of copies of Pete’s newest record, Iron Sea And The Cavalry, so if you’d like to get your hands on them for on-air giveaways, please don’t hesitate to be in touch with us. If you need more info, call Andy Gesner at 732-613-1779 or e-mail us at info@HIPVideoPromo.com. You can also visitwww.PeteFrancis.com to find out more about Pete Francis.