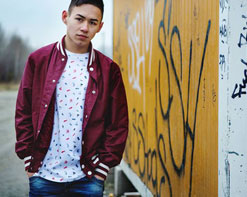 Throughout life’s journey we often encounter feelings, emotions, or circumstances that cannot be described in words. This is the goal that Pham, born Dawid Pham Ngoc, is looking to achieve when creating music.

Born and raised in Nysa, Poland, Pham began experimenting with music production at the age of 16, watching Youtube tutorials and countless hours of trial and error on FL Studio. Despite no formal music training, Pham’s love of the arts can be traced back to his interests in drawing and dancing, which have helped craft his vibe and sound today. With influences ranging from J Dilla, Flume, Flying Lotus, and DeadMau5, Pham began producing songs with strong melodic harmonies and compositions, hoping to create a supernatural experience through his music.

Not to be boxed in to any genre, Pham’s musical style is meant to be a fusion of various elements, combining electronic, hip-hop, down-tempo, and future bass into the beautiful meld featured on the MOVEMENTS EP. The lead single “Movements”, has already amassed over 3 Million streams on Spotify and over 12 Million streams on Soundcloud. The MOVEMENTS EP features collaborations with various rappers and singers, with a plethora of videos to be released over the coming months. Today, we bring you the “Movements” video.

The “Movements” video takes the struggles of addiction and gives it a saucy new twist. Instead of being an Alcoholics Anonymous or Narcotics Anonymous meeting, this one takes place at Sex Addicts Anonymous! Things are bound to get heated. Each attendee is introduced with their own personal niche so it’s only a matter of time before their wires cross. Bill, the leader of the meeting and also the “predator” type, has his own agenda and throughout the video we see him sampling the merchandise! The old saying of “don’t s**t where you eat” applies here and pretty soon Bill will have bitten off more than he can chew!

Pham is an artist with an incredibly bright future in his sights, and we’re all very excited to be working closely with him and his team to make him a household name. We are anxious to do anything we can to help make this video a part of your programming. Please get in touch with Andy Gesner and the team here at (732)-613-1779 or email info@HIPVideoPromo.com if you’d like to get your hands on a copy of MOVEMENTS.