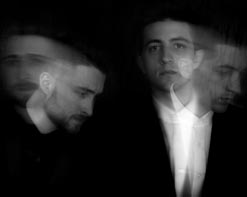 Are you ready for the ultimate runaway bride video? The clip for “Broken Halo,” the new single from the Los Angeles electronic duo Phantoms, condenses ambivalence about matrimony into four glorious minutes of boozing, sex, flames, motorbike rides, and fast food consumed while sitting on the curb. Nichole Bloom plays the bride with delicious abandon — and her flight from the altar is captured in all its turbulent beauty by director Ace Norton.

Phantoms is a relatively new act, but it’s already begun to make waves worthy of Southern California. The duo has been featured in Billboard magazine, toured the country with Com Truise, and is poised to release its debut album. “Broken Halo” is a taste of things to come: a pulsing, seductive electronic pop song with an effortlessly catchy release. The sound is sleek and modern, but the compositional architecture is classic. The track fulfills the promise of “Colors,” Phantom’s first single, and the pair’s stylish and imaginative remixes of songs by Phoenix, Arcade Fire, and Tame Impala.

Nichole Bloom, too, is a budding star, and a face you’ll be seeing a lot more frequently in the future. Earlier this year, she lit up the screen in a returning role on Shameless, the ambitious Showtime series about a family constantly on the verge of a meltdown. But she’d already established herself as an actress to watch with her memorable appearance in the raucous 2012 film Project X and her starring role in the acclaimed Model Minority, which was released the same year. Bloom is completely convincing as a young woman who gets cold feet at the very second her would-be husband attempts to slip the ring on her finger — and whose spectactular overreaction is something to see.

Ace Norton, who has shot clips for Scissor Sisters, Foster The People, LCD Soundsystem, and many other adventurous acts on the cusp between electronic music and pop-rock, helms “Broken Halo” with the mix of sensitivity and good humor that has become his hallmark. He takes Bloom’s predicament seriously, but he has fun with it, too, keeping her in her bridal gown no matter what misbehavior she’s getting up to. Bloom plays it to the hilt, swilling gleefully from a whiskey bottle, pinning down an old boyfriend, and making herself the hit of a sleazy truck stop. Norton’s images cleverly match the feel of the music: in one terrific sequence, Bloom takes off on a purloined motorbike and revs her motor just as the drums begin to build. It’s a music video with the soul of a short film, and it just gets better, and funnier, with repeated viewing.

Here at HIP, we are exceptionally excited to be working with Phantoms and thrilled to be on the promotional team at Family Artists for the first time to bring you this outstanding new video. Family Artists is a record label you’ll be hearing lots about in the eminent future, and their roster of compelling bands and artists is completely worthy of your attention. We want to get you whatever you may need to get this video into your programming, so please contact Andy Gesner and the HIP Video Promo team at (732)-613-1779, or email info@HIPVideoPromo.com .