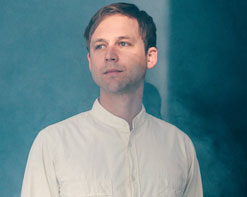 Scott Reitherman was planning to record the second Pillar Point album at home in Seattle, when he received an unexpected invitation — extended backstage in Phoenix after opening for of Montreal — to cut it at Kevin Barnes’ home studio in Athens, Georgia.

The result — recorded and mixed by engineer Drew Vandenberg (Toro Y Moi, Deerhunter, of Montreal) — speaks for itself as loudly as the records Reitherman blasted in his childhood bedroom, from the twitchy post-punk of Talking Heads to the Top 40 takeovers of Michael and Janet Jackson. It’s more than a mere nostalgia trip, however; much like the red-blooded dance party that is Pillar Point’s live show, Marble Mouth is a therapeutic sweat lodge of bold drum beats and lean synth lines that layer and wrap each song in kinetic skeletons.

Featuring a hybrid approach to the presentation of its heavyweight pop hooks, the album plants one foot firmly in the ‘80s, with the other exploring the outer realm of ultramodern electronic music. Meanwhile, sun-baked samples and vapor-trailed verses allude to everything from LCD Soundsystem to Broadcast, with Pillar Point’s surface-level gravitas hiding in plain sight, as sharp as ever. The first single, “Dove,” is catchy and compelling in equal measure and as honest as a pop single gets, presented as a video that will inevitably shake off the rust and get the dancing shoes out!

For “Dove,” director Jacob Krupnick set up shop in the streets of Bogota, Colombia where he then unleashed dancer Kia Labeija onto the urban center. As she performs a stunning array of moves for the camera, it’s impossible not to be transfixed by the fluid motion of her body. But try to look a little closer and notice the intricacies of the video as it also showcases the people and the culture of Bogota. Performing in a public forum and capturing the natural reaction of the crowds was a goal of Krupnick’s and it creates a heightened sense of synergy between art and landscape. Labeija eventually finds herself face to face with a woman carrying a caged dove, who she is quick to engage and offer a chance to break free of her own constraints through the power of dance.

We want you to get this video into each and every one of your programming, so please get in touch and let us know what we can do to make that happen! Be sure to stay up to date with all of the latest news on Pillar Point, including tour dates across the US this March, by contacting Andy Gesner and the HIP Video Promo staff at (732)-613-1779 or email us at info@HIPVideoPromo.com . You can also visit www.PolyvinylRecords.com for more info on Pillar Point.