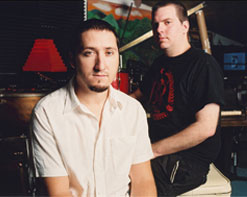 A big warm hello to all my programming friends! It’s Andy Gesner and the staff from HIP Video Promo, with another clip from one of the most loved bands of 2005 here at HIP HQ. They might not have quite the public profile of some of the better-publicized post-punk bands, but wherever you go in America, you’ll find people who are crazy about the sound of Pinback. Intelligent, precise, and restless, the duo of Rob Crow and Armistead Burwell Smith IV have won increasing admiration and respect with each Pinback recording. Prior EP and LP releases have explored autumnal indiepop, dreamy electro-prog, slow-droning emo, and delicate shoegaze rock, and invested each style with poise and elegant grace. The lyrics: heartfelt, revealing, articulate, often harrowing, and frequently darkly humorous.

Summer in Abaddon, their first full-length for Touch & Go – home of thoughtful, literate indies from Quasi to CocoRosie – is an encapsulation of everything that makes Pinback unforgettable. Built around meticulously-constructed guitar parts and the alternately breathy and impassioned vocals of Smith and Crow, these tightly-assembled songs spark like flint. Compositions resemble those of Built To Spill or the Wrens’ elegant Meadowlands, but Pinback’s vision is tougher, darker, and more desperate: “Abaddon” is a figure for hell, and the album does indeed trace a descent into an emotional underworld of missed connections, enforced isolation, and frustration. The images can foreboding: burned-out buildings, wrecked train tracks, sinister UFOs in the sky, sickness, night-shivers, flames. But throughout, the duo maintains their self-possession and their wry humour: Crow breaks a cold hallucination to tell the object of his attention that he feels “safe as a cootie wootie” with her.

That’s from “Fortress”, the single, and one of the poppiest and most straightforward songs the duo have ever recorded. But that isn’t to say that it doesn’t bear all the hallmarks of Pinback’s sound. The oscillating guitar parts interlock and weave around each other, and Smith and Crow’s hushed harmonies blur the razor-sharp edges of their imagery. The beat, however, is nearly club-ready – crisp, funky, and eminently danceable, the logical fruition of the ideas explored on the near-technoOffcell EP. Pinback even strips the instrumentation away for a few bars to let the groove roll out on its own, just the way a club DJ might.

So it’s no great shock that the clip for “Fortress” contains a choreographed sequence. The dancers, who discharge their steps with the synchronized precision of a chorus line in a Pink video, are hand-drawn stick-figure soldiers. As a matter of fact, everyone in the “Fortress” clip is a stick-figure, rendered in squiggly white lines against a gorgeous full-color animated background. The landscape, drawn by digital media veterans Loyalkaspar, is illustrated in breathtaking detail – first as a fairyland of rich idyllic vistas, and then as a scene of war-torn destruction. The humans who inhabit it are transparent – daylight penetrates their hollow bodies like sunbeams through cellophane. We are insubstantial and transitory, the video seems to argue; only the perpetually-regenerating natural world around us carries any permanence.

The narrative in the clip carries fairy-tale significance: a prince and princess meet and fall in love amidst the greenery. A humanized figure of nature rows his boat beside them, scattering seeds that explode into trees and flowers around them. When the stick-figure prince picks a flower, the ground erupts into barbs and thorns, and the two houses are divided. The ensuing war – which ends after a bomb-flash turns the full screen a blinding white for a single horrifying moment – is one of the more remarkable pieces of stick-figure violence you’ll ever see. That’s not because it’s graphic (it isn’t), but because it beautifully conveys both the ridiculousness and the futility of armed conflict.

Here at HIP we are thrilled to be working with Sara Tolbert and the whole crew at Touch and Go to bring you this incredible clip from one of our favorite bands of 2005! We will have copies of Summer In Abaddon for on-air giveaways and for your listening enjoyment. If you need more info, call Andy Gesner at 732-613-1779 or e-mail us at info@HIPVideoPromo.com /a>. You can also visit www.tgrec.com, or www.Pinback.com to find out more about Pinback.