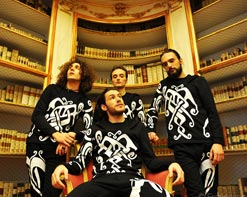 The Piqued Jacks are brave souls. Raised in a small village in Italy, they have methodically made their way from obscurity to Austin, the heart of the indie music scene, performing at SXSW in 2013 and 2014, and sharing the stage with international acts such as Atoms for Peace and Bob Schneider. Their powerful alliance and headstrong vision has resulted in rapid success and the positive flow of their career indicates a confident band gaining serious momentum. With the cinematically dazzling new clip for “Romantic Soldier,” from their album Climb Like Ivy Does, they show the maturity and musical craftsmanship they’ve been honing for several years.

Most bands don’t have the gumption or conviction in themselves to uproot themselves and move to another continent to support their ambition. For Piqued Jacks, the decision came naturally after the exceptional feedback they received on their past EP, Just A Machine (produced by Grammy nominee Brian Lanese) and their two standalone singles “Upturned Perspective” and “No Bazooka.” Positive press from Earmilk, Balcony TV, radio stations and the front page of CMJ all positioned them to seize this momentum when to work intensely on their ambitious, sonically expansive first LP, Climb Like Ivy Does, released in January of 2015. This new compromise between power and sweetness, and the inspiring story connected with the songs, are a huge evolution for an already greatly evolved outfit. The first single we bring for your consideration is “Romantic Soldier,” a song as fierce and passionate as any.

The setting for the “Romantic Soldier” video is a sprawling and imposing library spanning several stories and levels. A young girl makes her way through the classically adorned room carefully selecting which book she’ll pick off the shelf. A key falls from the book and instantly creates a metamorphosis of this simple brunette student into a stunning beauty with flowing red locks. The key unlocks a secret door in the corner and she leaves on a quest to blaze a trail of her own. Throughout the video Piqued Jacks provides a powerful performance and creates a deafening sense of urgency. Will she find what she’s looking for? There’s only one way to find out!

We’re very excited to be working with Piqued Jacks to help them continue on their upward trajectory through the global musical landscape. Great things are ahead for this group and now’s the right time to get on this train! Please contact Andy Gesner and the HIP Video Promo crew at (732)-613-1779 or email at info@HIPVideoPromo.com for more info.