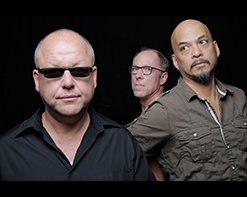 Pixies are a band that need very little in the way of an introduction. They’ve inspired generations of indie rock bands and fans with their classic albums Doolittle and Bossanova, and fans have been waiting over twenty years for this moment. From the hotly anticipated Indie Cindy, the first full length album since 1991’s Trompe le Monde, HIP Video Promo LLC presents a most endearing clip from Pixies entitled “Greens and Blues.”

We all know Pixies for producing some of Alternative Rock’s all-time classics, such as “Where Is My Mind?” from 1988’s Surfer Rosa, which has become an indie staple, and was featured in the 1999 film Fight Club amongst many other pop culture pieces. After five genre-defining studio albums, Pixies disbanded in 1993, and then launched their reunion tour in April 2004, playing to sell-out crowds all over the globe for seven years, a longer period of time than they were a band originally. But writing, recording and releasing new music was something that the band had been wanting to do for a long time, so they secretly booked studio time in Wales for the fall of 2012. Six days into the recording, founding bassist Kim Deal decided to leave the band; Black Francis, Joey Santiago and David Lovering made the decision to carry on, working with a variety of touring bassists, something they’d never done. As the UK’s DIY wrote about the new music, “They’re back. They’re still brilliant. God save the Pixies.”

Director Josh Frank sends viewers on an adventure in “Greens and Blues.” Teeming with images of earthly landscapes, our interests are peaked by this realistic/sci-fi Vonnegut extravaganza, blending cosmic surrealism with the sweeping expanse of the oceans. It moves at a comfortable pace, lulling the viewer into the visual palette that perfectly accompanies the song. With all of the hallmarks of a classic Pixies tune, the songs proves that their songwriting prowess is as sharp and as relevant as ever.

Be sure to follow Pixies during their upcoming world tour, and grab hold of their new album Indie Cindy as soon as it hits the shelves. For more information on this exciting new video, please contact Andy Gesner and the HIP Video Promo staff at (732)-613-1779 or email us at info@HIPVideoPromo.com . You can also visit www.PixiesMusic.com for more info.