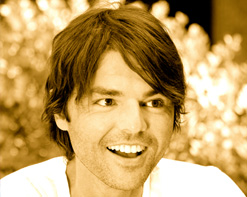 Salutations programmers! It’s Andy Gesner and the HIP Video staff, here with a beautiful video set in a natural wooded wonderland. P.J. Pacifico’s “Lakeshore Drive” will not only fill the void of your acoustic desires, but will also have you booking a trip into the northern natural expanse upon first glimpse.

Singer-songwriter P.J. Pacifico delivers a confident, upbeat collection of road-tested pop rock morsels on his Viper Records release, Outlet. The record features songs produced by Grammy winner David O’Donnell (John Mayer, James Taylor), as well as producer Andy Abel on electric guitars, Jack Daley (Lenny Kravitz) on bass and Brian Doherty (They Might Be Giants) on drums. With a radio-friendly sound that evokes Gin Blossoms and Matthew Sweet, and a storyteller’s cadence that has been compared to James Taylor, Pacifico appears to have crafted a blend of coffee shop goodness aimed straight for the heart of the mainstream masses. The sense of hopefulness is palpable with every chord, as is Pacifico’s hold of the new material – all of the tracks were performed live for months prior to recording the album, as Pacifico embarked on an extended residency in his home state of Connecticut, often playing as many as four nights per week to gauge crowd reactions for his new material. What better way to make a record that fans will adore than writing it along with them? Pacifico has also shared the stage with Crosby, Stills & Nash, Lynyrd Skynyrd, Sugarland, Hank Williams Jr., Levon Helm, Leon Russell, Bob Weir & Ratdog, Martin Sexton, The Low Anthem, Donavon Frankenreiter, Dar Williams, Guster, moe., Ryan Shaw, and Sean Kelly of The Samples.

“Lakeshore Drive” is the latest single from Outlet. The album has recently been highlighted by M Music & Musicians Magazine, iTunes editorial review, Something Else!, Blogcritics.com and many more. Has also performed on The CW Network and Fox morning shows. “Lakeshore Drive” is an example of how acoustic pop rock doesn’t have to stick to conventions, combining the gentle portent of Paul Simon with unconventional vocal melodies that would fit in on an Incubus record. How does one capitalize on such vast expanses of sounds you ask… by setting it to roam free in the forest! P.J. Pacifico chooses a gorgeous woodland paradise for the track, which reminisces about a place much like the one clip. The singer walks along the brushes as he chases after an elusive dancing woman in the wilderness. After watching this clip, you will immediately want to throw the song on your iPod and make your own trek into a personal northern paradise.

It’s always a pleasure to bring you an artist that has carved his own niche within the pop rock landscape, staying away from the clichés most musicians fall right into. We’ve got copies of Outlet on hand for your contest or giveaway needs, so get in touch right away! If you need more info, call Andy Gesner at 732-613-1779 or e-mail us at info@HIPVideoPromo.com. You can also visit www.ViperRecords.com or www.PJPacifico.com to find out more about P.J. Pacifico and any show dates near you.