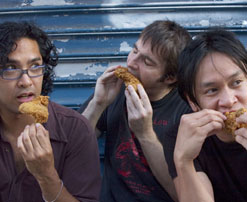 Hello fellow music video lovers! It’s Andy Gesner and the staff from HIP Video Promo, back with our 100th video of 2006, this time from another indie band with a fantastic sound and a fascinating backstory. In New York City, Nineties indie-rock veterans Versus are still considered titans: their influence on modern Gothamite alternative music can’t be understated. Versus’s five albums laid the groundwork for the NYC guitar explosion of this decade, and helped reorient the local alt-rock scene away from fey, ethereal sounds and toward something more direct and melodic. And with the 1996 addition of James Baluyut on guitar, Versus changed from purveyors of six-string jangle to a rhythmically complex and harmonically rich combo. Now Versus is no more, but Baluyut has kept on rocking, and his compositional sensibilities have only grown more sophisticated. +/- {Plus/Minus} is his new band, and they continue to do what Versus used to do: playing advance guard for New York City rock and roll, pushing the alt-scene in challenging directions, and never failing to come up with compelling tunes.

Baluyut isn’t the only former Versus member now playing in +/- {Plus/Minus}. Guitarist and vocalist Patrick Ramos has made the jump, too, and their musical relationship has never felt tighter. They’ve broadened their instrumental palette, incorporating synths, atmospherics, and occasional machine beats to their mixes, and they’ve crafted a sound that could be called intuitive, dreamlike, provocative, and cinematic. Drummer Chris Deaner spikes the tracks with wild fills and imaginative inventions – yet thanks to Baluyut’s uncanny sense of harmonic balance, they always feel like logical components of the impeccably-crafted songs.

“Steal The Blueprints”, the lead single from the upcoming Let’s Build A Fire, is such a song. The electro-drum breaks are jaw-dropping in isolation, but they’re so well-woven into the track that on your first listen, you might not even notice them. The melody seems to rise effortlessly from the guitar arpeggios, and the vocal performance is emotionally-charged and moving, but never less than poised. It’s an extension of the superior writing on 2003’s critically-heralded You Are Here, and a further refinement of what Derek Miller of Stylus Magazine called the +/- {Plus/Minus} “sense of delayed urgency that blends the tracks like a symphony”.

Chris Deaner isn’t only an idiosyncratic and visionary skinsman – he’s a filmmaker, too, and it’s his eye behind the camera in the “Steal The Blueprints” clip. He’s given us a performance clip of sorts; but it’s one of the weirdest and most singular performance clips we’ve ever seen. The bandmembers are shot on Midtown Manhattan sidewalks during a cold afternoon. As pedestrians in winter coats stream by them, they look up and address the camera. Earphones on and listening along, they mouth the words and play air instruments, punctuating key dramatic moments in the song. Deaner fudges the playback rate of his footage, removing frames and accelerating the motion of the passersby. This makes the musicians’ actions oddly exaggerated, too: choppy, severe, unsettling. Just as in a dream, everything is just a little bit off – strange, suggestive, and experimental, but still somehow grounded in quotidian reality.

Here at HIP, we’re proud to be working once again with Cory Brown and all of friends at Absolutely Kosher to help bring your viewers this compelling new video. The new album, Let’s Build A Fire, is here in the HIP office, so if you would like any copies for on-air giveaways or would like to set up video interviews when the band is in your town, don’t hesitate to be in touch! If you need more info, call Andy Gesner at 732-613-1779 or e-mail us at info@HIPVideoPromo.com>. You can also visit www.PlusMin.us to find out more about +/- {Plus/Minus}.