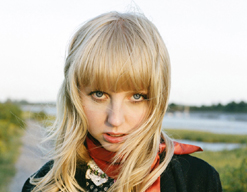 It’s Andy Gesner and the HIP Video Promo staff, here with a brand new clip from an English songwriter and storyteller with an adventurous spirit and a mercurial sound to match. Polly Scattergood made her name in the clubs of London, but she was born and raised in Colchester, Essex – by some measures the oldest city in the U.K. And she’s won the hearts of listeners in the British capital, in part, because she’s not a trend-follower: she’s in the City, but not of it. Instead, Scattergood follows a personal vision and a singular artistic path – one that’s confessional, whimsical, resolute, and emotionally forthright. She may be beloved by the same fans who’ve put Kate Nash, Lily Allen, and the Ting Tings on commercial radio, but her restless, quietly intense pop songs share more with Kate Bush (whom she’s been compared to by one of Britain’s most influential deejays) than with anything on the Top Of The Pops. Critics on both sides of the Atlantic have noticed her inclusive appeal: Scattergood’s debut album “successfully bridges the gap between teen pop and adult alternative rock”, writes James Christopher Monger in the All Music Guide.

It’s also tremendously fun. Scattergood’s personal reflections can be mordant, painfully candid, and remarkably honest, but she never loses her sense of humor or play. Even while dissecting her own self-destructive impulses (“Nitrogen Play”) or penchant for dead-end relationships (the incisive “I Hate The Way”), her melodies sparkle and her wit shines. Produced by the celebrated Simon Fisher Turner – himself an accomplished singer-songwriter whose work has found a mass audience despite his unwillingness to accede to the demands of the marketplace – Polly Scattergood is a colorful, cheeky, probing, wholly-engaging trip through the diaries of an unusual (but entirely identifiable) young woman.

“Please Don’t Touch”, the singer’s lead single in America, is Polly Scattergood at her best. Pained poetic observations are delivered with good cheer; her heart might be breaking, but her perspective remains intact. Turner decorates “Please Don’t Touch” with bouncy piano, shimmering acoustic guitar, and occasional analog synthesizer – but the most powerful instrument here is Scattergood’s expressive voice. When she sings about the dark reaches of her mind, she makes those haunted corridors palpable for listeners; when she sings of joy, her glee is infectious.

That feeling of elation is captured in Blair Young’s dizzy clip for “Please Don’t Touch”. Young, the favorite video director of Belle & Sebastian and Camera Obscura, specializes in making gorgeous, giddy clips – and he’s outdone himself here. As Polly Scattergood dances through the streets of the London suburb, Young’s camera transforms tower blocks, beat-up old vans, and working-class curbsides into a gorgeous urban tapestry, glistening under high spring sun. The sky is blue, the air is clear, and the medium is real celluloid film – and the viewer can tell. Scattergood herself looks terrific: her long blonde hair frames her angelic face. Everything she wears is stylish and slightly offbeat, and she moves through the city with understated confidence. She isn’t blithe as she sings toward the camera, because that would imply thoughtlessness that she’s surely incapable of; instead, she’s completely self-possessed as she dances, a fetching tour guide through a workaday town made inexplicably gorgeous by her magical presence.

Big thanks to Mute Records for bringing us on board to be a part of the Polly Scattergood team! If you need more info, call Andy Gesner at 732-613-1779 or e-mail us at info@HIPVideoPromo.com . You can also visit www.Mute.com to find out more about Polly Scattergood.