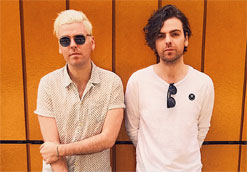 Even to those who know Tokyo well, Harajuku and Shibuya can still feel like a dream. These crowded commercial districts are places where traditional Japanese iconography and international youth culture exist side by side. Every block contains arresting juxtapositions and fresh surprises. Pop Noir shot the clip for “White Jazz”, their latest single, right in the middle of Shibuya, and they’ve captured the hallucinatory nature and sheer explosive energy of the neighborhood as well as any documentary filmmaker ever could.

But then the guys in Pop Noir know a thing or two about hallucinations. Twin brothers Joe and Luke McGarry have mesmerized audiences with their dizzy, shimmering, synth-spiked indie-pop since forming in the mid-‘00s. They’re also accomplished, award-winning visual artists who specialize in matching musicians with graphics that amplify the strengths of their recordings. The McGarry twins have made memorable animated shorts for Guster, Desaparecidos, Hoodie Allen and Viceland, and they’ve guided the visual aesthetic of FYF Fest and Tenacious D’s Festival Supreme.

A musical act with a resume like that can be expected to make intriguing videos, and Pop Noir has reliably delivered. The “White Jazz” clip is a sequel of sorts to “Don’t Fool Yourself”, the group’s otherworldly 2015 clip. In it, they cruise the deserted streets of Los Angeles in the early morning, singing the words to a camera in the dashboard as the city lights paint streaks on the windshield. With their deadpan expressions and moments of near-telepathic communication, the McGarrys are the stars of the video – but Los Angeles itself plays a critical supporting role. “Don’t Fool Yourself” captures Pop Noir’s adopted home city in all of its weird, bright, electrified color.

“White Jazz” gives Tokyo the same treatment. This time, the McGarrys are pedestrians, not drivers (it would be difficult to ride through the bustling heart of Shibuya). But they’re still side by side throughout the clip, occasionally trading glances, remaining impassive despite the spectacular surroundings. No matter how nonplussed they appear, they’ve given us plenty to see: crowded outdoor markets with t-shirts and paper lanterns, Shinto temples behind cyclone fences, giant life-sized dolls and dragon sculptures, graffiti and tall, featureless, concrete walls, and the sleek interior of Toyko underground trains. It’s beautifully shot and wholly immersive, and it’s a perfect accompaniment to a marvelously moody song about miscommunication.

What a thrill it is to partner with Pop Noir to share this wonderfully crafted, intriguing new visual for “White Jazz.” It is our hope that you embrace this clip as much as we have here at HIP and add it to your regular programming and online presentations in a timely fashion. Rest assured we’ll have plenty of Pop Noir merch available for on-air contests and giveaways, so please don’t hesitate to get in touch. For more information on Pop Noir, please contact Andy Gesner and the HIP Video Promo team at (732)-613-1779 or email us at info@HIPVideoPromo.com. You can also check out www.facebook.com/popnoirofficial for the latest updates.