Punchline “Friend From The Future” 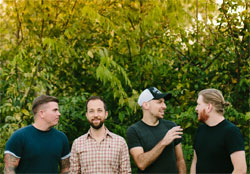 After a two-decade run as one of the most thoughtful, challenging, and musically inventive pop-punk bands in America, here’s what we’ve learned about Punchline: never, ever think you’ve got these guys pegged. They’ve got energy and attitude to burn, but they’re also accomplished songwriters with adventurous spirits and ambitious goals, and their songs don’t conform to expectations. And Lion, their eighth and latest album, demonstrates that their bag of tricks is nowhere near exhausted.

Take “Friend From The Future”, the kickoff track and optimistic, uplifting statement of purpose. At first, it seems like the sort of straightforward pop-punk shouter that the Pittsburgh, PA quartet does so well. That it is, but it’s also something much subtler. Listen to the clever backing vocal parts, the high harmonies weaved into the track, the auxiliary percussion, the breakdowns and buildups, the careful twists and turns and neatly-sculpted contours of the composition, and you’ll realize: nothing here is typical. These are modest guys, and they won’t say so, so we’ll say it for them – when you’re listening to Punchline, you’re in the presence of masters.

Longtime followers of Punchline don’t need to be told. They already know about the chances the group has taken and the pivots these musicians have made – from the scruffy thrills of the late ‘90s self-released albums, to the pure confidence of 37 Everywhere on Fueled By Ramen, to the poetic quality, eclecticism, and embrace of electronics on the recent albums. Thrilled, released in 2015, earned the band plaudits from AltPress (“absurdly memorable”), New Noise (“full of songs you’ll want to ingest, and digest, and repeat for days to come”), idobi (“lyrically powerful”), and many others. Lion, which features guest appearances from Anthony Raneri of Bayside and Matt Theissen of Reliant K, is certain to continue the winning streak.

The kinetic video for “Friend From The Future” captures Punchline in performance – which is appropriate, since the band will be touring the eastern United States with The Spill Canvas this summer. But as is always the case with Punchline, there’s more than meets the eye, and even simple details are presented with skill and care. The group makes great use of colorful washes, bright frames, and patterned backdrops – the screen splits, the camera shifts in and out of focus, and frontman Steve Soboslai is nearly absorbed in a tunnel of light. Periodically, print messages flash on the screen, too: they’re bits from the lyrics, or good advice implied by the song. It’s all bright, bold, undeniable, an exciting ride that lasts four minutes, but one that fans can – and surely will – take over and over again.

Here at HIP we’re profoundly pumped to be working with Punchline and InVogue Records to spread the word about this terrific band like wildfire! Rest assured we’ll have plenty of outstanding Punchline merch to set up online/on-air contests and giveaways throughout the campaign and if you’d like to see them live or set up an interview, please let us know and we’ll hook it up. For more information please contact Andy Gesner and the HIP Video Promo team at (732)-613-1779 or email us at info@HIPVideoPromo.com. You can also visit Punchlion.com for more information on Punchline.