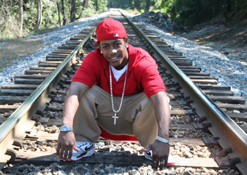 Greetings my fellow music lovers, it’s Andy Gesner and the staff from HIP Video Promo, here to share a brand new clip from a big-voiced rapper with a sentimental message. Artists old and young, black and white, established and aspiring – they were driven out of New Orleans by the devastating storms of autumn 2005. Many of them settled in neighboring cities, but kept their relationships and contacts in the Big Easy. For RJ, an up and coming native of Kansas who has life long family connections to New Orleans, and who was mere months away from relocating there for good, the hurricanes hit at a particularly inopportune time – just as the young emcee was establishing himself as a force to be reckoned with in the city’s storied rap game. He’s already established himself as the toast of his hometown of Topeka, and he’s put the Kansas capital on the hip-hop map. Now he’s solidified his connection to New Orleans by relocating there permanently (he attends classes at Grambling University) and thanks to his irresistible single, he’s been making a name for himself across the South and Midwest.

It’s his hometown that he shows off in the clip for “My Star”. Director DocDeezy and Kansas City indie production house GMF Films are well-acquainted with Topeka, and the videomakers prove adept at capturing its charm. RJ and crew shoot outdoors at intimate Chesney Park and the picturesque Shawnee Lake – it’s an all-day party they’re throwing, and it seems as if the entire capitol city is invited. DocDeezy uses slo-mo and soft filters to evoke the feel of a warm summer day; the sun pours through the canopy of leaves and lights up the grass, the pavement, the dominoes games in the park, and the wide smiles of the emcee and his young friends.

“My Star” is definitely one for the ladies, and RJ has the charm and skills to deliver it. Over a butter-smooth beat, the emcee raps about his passion and devotion to a girl who lights up the sky – but makes sure she knows that he’s in no rush to get married. Pithy and clever, RJ’s rhymes feel confident without ever being boastful: it’s easy to imagine the local girls swooning at the sound of his deep voice. “No I don’t have fancy cars and a jet”, he concedes, “basically what I’m riding on is love and respect.” Kansas City crooner Bonyx adds extra sweetness to the chorus, and sings an extra verse of his own; this as a true collaboration, and the two young artists’ performances complement each other perfectly.

A song like “My Star” requires hotties for the video, and once again, RJ delivers. The female lead here lights up the screen; she stands out among her fetching friends. Her chemistry with RJ is remarkable – the two young Kansans seem genuinely smitten. In the clip’s final shot, they’ve left the party behind, and they’re alone on a romantic bridge by Shawnee Lake. The emcee places his thumb on his girlfriend’s chin and looks right at her; it’s a gesture of warmth and familiarity, and it’s positively heartwarming.

We have the good fortune to be working directly with RJ himself to bring you this fresh new video. If you need more info, call Andy Gesner at 732-613-1779 or e-mail us at info@HIPVideoPromo.com.