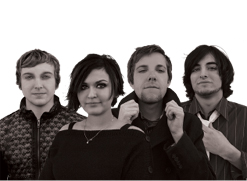 Cheers programmers everywhere! It’s Andy Gesner and the staff from HIP Video Promo, here with a brand new clip from an outstanding and radio-ready young band. Life Lessons is the name of the debut from California combo Radagun, and it’s an apt title. Sure, the quintet’s pop punk is raucous, catchy, and tremendously fun to listen to. But this band also has lots to say – and a clever way of expressing themselves. Songs on Life Lessons are indelible snapshots of life as a young romantic: diary entries heatedly-scrawled, crackling with wit and passion. Sharp-eyed frontwoman Aimee Ortiz has plenty to report about schoolyard crushes, first loves consummated and unrequited, the pained ambivalence and wild hopes of youth, and the unique thrill of playing in a band on the cusp of stardom..

Over the past year, Radagun has become accustomed to that feeling. Formed in 2008, they’ve quickly become the hottest bands on the underground pop-rock circuit, and their presence is in demand throughout the country. Their dynamic stage show – and Ortiz’s undeniable charisma and microphone presence – has won them fans wherever they’ve performed. This spring, they’ll be back on the road in support of Life Lessons, playing at clubs, theme parks, and anyplace else where there’s demand for powerful vocals and six-string crunch. Radagun already has supporters all over the nation – their mySpace tracks have been played hundreds of thousands of times. When Life Lessons drops in the first week of March, it’ll be no shot in the dark: message boards are buzzing, and fans are already anticipating its release.

That’s because Radagun’s songcraft connects immediately with audiences. Aimee Ortiz is talented, identifiable, and refreshingly candid – every word out of her mouth has the ring of truth. She pens pointed letters to herself (“Dear Self”), writes with commendable honesty about anxiety and dark nights (“Panic”), takes aim at an overdressed classmate (“Party Girl”), wriggles out of one relationship and into another (“It Never Ends”), and, in the title track, gives a plausible three-verse summary of a day in the life of a typical and slightly-rebellious American teenager. “Runaway”, the band’s lead single, is another tale of vexed romance, and Ortiz delivers it with the conviction of lived experience..

The bandmembers back her up with a ferocious performance of their own. Like all of Radagun’s songs, “Runaway” is edgy, hooky, and instantly memorable. Grag Amaro’s delightful clip for the Radagun single catches the band in their element – the halls and classrooms of a suburban high school. Unlike many such clips, the kids here actually look like students: they’re identifiable types, and their attitudes and frustrations will be familiar to anybody who has spent four years in an educational institution. Even the bespectacled and slightly-addled teacher looks believable. Most importantly, Radagun fits in perfectly with the milieu – these are their peers, and when Ortiz turns and delivers her romantic complaint to a classmate, it feels like a natural consequence of typical teen banter. They’re giving voice to the things that all these kids feel; they’re class representatives in the truest sense. The desks get hauled away, the guitars and drumsticks come out, and Radagun delivers an impromptu concert. Their peers, as you’d expect, sing along as if the words were written exclusively for them. (And they were.)

We are stoked to bring you “Runaway” courtesy of Radagun and Girl Friday Records! Hit us up for copies of their new CDLife Lessons for all your giveaway needs! If you need more info, call Andy Gesner at 732-613-1779 or e-mail us atinfo@HIPVideoPromo.com . You can also visit www.Radagun.com to find out more about Radagun.