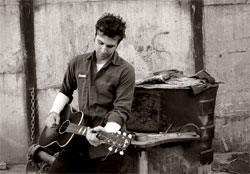 What you see is what you get. With his rugged voice, and cross between blues and punk, Adam Silvestri, better known as Radiator King, will instantly grab your attention and make your ears perk anytime you hear him. His songs are like letters from a friend. They’re insightful, honest and easy to cherish. They invite re-visitation, and sometimes even contemplation. And they continue reverberating long after they’re done playing.

Radiator King prides himself on songwriting from the heart: telling stories that affect him personally, but portraying them in a way that listeners can draw their own conclusions and relate to on a personal level. Boston is a hardworking, blue collared city that has shaped Silverstri’s personality and work ethic. Proud of where he comes from, he brings his experiences from the city and the people of it to his new single “So Long (Charlie),” a story of change. “The song depicts a scenario of the final moments as an individual accepts the ending of an event or chapter in his life. Someone close to me had gone to jail not too long ago and I can recall thinking about them a lot during the writing of the song. I tried to imagine this person and how they may have responded to this difficult situation”

The video portrays Silvestri’s outlook on life and the mentality that he and the many people of his home city have: life goes on. The video takes you back to the 1940s, post World War II era. It follows Adam as he is about to be taken away to prison and undergoes a large negative change in his life. “Through the main character, I aimed to depict a voice that represents that of the working class. There is a certain type of pride that the character possesses – pride in where he comes from and pride in what he stands for.” The video beautifully follows the lyrics and allows viewers to understand what Silvestri is tying depict. The rest of the video follows the main character and how he is dealing with this change and the obstacles he needs to overcome. Ultimately the end of the video sees him being released and shown headed off hitchhiking in the back of truck which portrays the original message of the song: life goes on.

Now a New York resident, Radiator King still shares the hardworking mindset of his home city, bringing that mentality to every facet of his music career. With his roots tracing back to Boston’s underground scene, Radiator King will make an impact on anyone who he comes across.

We’re thrilled to be working with Adam once again and champion an artist with a tireless work ethic and a true DIY spirit. If you’d like to get hooked up with a copy of his album A Hollow Triumph After All, or catch him at any of his upcoming tour dates, please don’t hesitate to get in touch. Rest assured we’ll have plenty of outstanding Radiator King merch to set up online/on-air contests and giveaways throughout the campaign so please reach out to us if you’d like to get your hands on some. For more info on Radiator King please contact Andy Gesner and the HIP Video Promo team at (732)-613-1779 or email us at info@HIPVideoPromo.com. You can also visit www.RadiatorKingMusic.com for more information on Radiator King.

For info about other Radiator King videos, click HERE