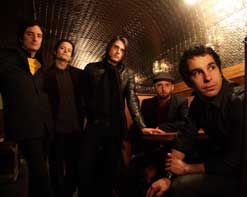 Hey, everybody! It’s Andy Gesner and the staff from HIP Video Promo, hoping you had an enjoyable Memorial Day weekend. But now that the summer’s here and all the windows are open, it’s time to get up and dance – and Radio 4 are here to help.

It only takes a few seconds of ” Enemies Like This “, the title track to Radio 4’s new album, to realize that the Brooklyn-based band has returned with all cylinders fired up and with a rejuvenated sense of purpose. Radio 4 have never been ones to shy away from making a loud noise or issuing a firm statement, but on Enemies Like This, they’ve both streamlined and stretched their sound, they’ve cut the fat, trimmed the filler, and focused on the meat that makes the music, not the spices that can bury it. Enemies Like This is the album long awaited by all those who know that, up to now, Radio 4’s strongest impression has been made from the stage.

“The idea behind the record,” notes singer and bassist Anthony Roman, “was to get as close to what we sound like live and to record as live as possible. We rehearsed from July until December at the Salt Mines in Dumbo, Brooklyn, where we wrote about 16 songs and narrowed it down to what we thought were the best ten – or the ten that made the best album. We then recorded one song each day: most of the final tracks are just first or second take.”

“Lyrically, we tried to be less overtly political and sloganeering,” notes Anthony Roman of Enemies Like This. “We tried to write in a style more influenced by the beat(niks and the idea of ‘spontaneous prose,’ whereby the first thing you think of gets jotted down and considered. Often these ideas worked themselves into the song. Of course there are political/social ideas, but there are more personal songs than ever. I was very into the idea that a political song could be a love song in disguise or vice versa.”

The video for “Enemies Like This” was directed by Piper Ferguson – perhaps best known for her photogrpahy as well as being co-promoter at the Los Angeles rock club Bang! Ferguson, whose band photography has appeared in rock and roll magazines around the globe, grasps the Radio 4 vision and sets it dancing. Roman and his bandmates play in front of a flattened backdrop of skyscrapers, brownstones, and New York City streetscapes.

Astralwerks are keeping us well stocked with copies of the Enemies Like This CD and all sorts of other goodies for promotional giveaways, including Radio 4 stickers and buttons. The band will be on tour starting in Texas on June 9th, and we’d love to set you up with a video interview or ID when they come to your area. If you need more info call Andy Gesner at 732-613-1779, or email info@HIPVideoPromo.com”>info@HIPVideoPromo.com. You can visit www.astralwerks.com or www.r4ny.com to find out more about Radio 4.