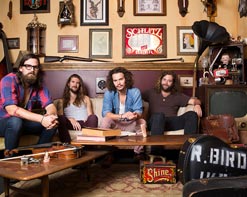 To see and hear them now, you might never believe that a few short years ago Radio Birds had a completely different lineup, look, and sound. Their new video for “Hold On Me” has the look and sound of a group that seems more like they met in diapers as opposed to undergoing a fresh reinvention. In early 2013, rising united from their earlier musical experiences, these four young men decided to take a risk and start completely over with a new name and sound. They quickly worked up a batch of new songs, and by that summer they had recorded a successful EP and had begun playing extensively, even winning the 2013 Masquerade Musicians Showcase in Atlanta, GA. Within a year of their rechristening, they were booked for The Rock Boat 2014 (and 15!), were featured in a major motion picture (Jason Momoa’s Road to Paloma), played SXSW, and attracted the services of indie Atlanta label Brash Music. Things have moved quickly for a reason, and everyone involved points back to two causes: Radio Bird’s irresistible character and undeniably unique sound.

That sound is simple: Plain-Old Rock and Roll Music with a distinctly hairy touch. Meaning, it is not clean, it is not easy, (or too difficult), and it is not The Next Logical Revival of a Previously Popular Genre From the Seventies. It is what you get when four guys all write music with the basic beliefs that it must be played live, and it must be played everywhere. Each of their songs is different from the others and is balanced by the web of harmonies that entangles the whole group. Everybody sings, and sometimes, you just can’t help but sing along.

“Hold On Me” is a raw and gritty showcase of the band and their unrepentant approach to their craft. Shot entirely in black and white, the video follows the journey of a most assuming object; a Bic lighter. But in reality it’s the perfect central prop considering how in the world of live music and rock and roll few things change hands more frequently than a lighter! It’s one part documentary following the Birds around as they get themselves set up for a night of rock and roll while being in possession of the lighter, and one part following the journey of the lighter as it changes hands and sees some pretty wild stuff! It survives a drop ion the toilet, a change of hands due to a purse snatching, a police chase, and a street hustler, among others. It’s a unique approach to the narrative, but a terrifically simple approach with a familiarity that resonates with viewers far and wide.

It’s a real treat for us here at HIP to be working with such a formidable outfit and we’re psyched to introduce them to you and your viewers! We are happy to hook you up with whatever you may need so don’t be shy about getting in touch! For more information you can contact Andy Gesner and the HIP Video Promo crew at (732)-613-1779 or email us at info@HIPVideoPromo.com for more info on Radio Birds.