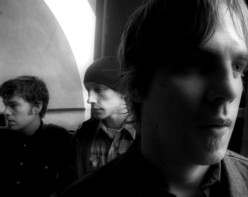 A big hello to all of my esteemed music video programmer friends! It’s Andy Gesner and the staff from HIP Video Promo with yet another super cool video for you all. Today, it’s our pleasure to introduce you to Raising The Fawn, a pensive, thoughtful, and frequently enthralling three-piece from Canada. Frontman and songwriter John Crossingham has been a contributor to Toronto’s expansive and impossibly fruitful Broken Social Scene collective, and his work with his own band shares some qualities with You Forgot It In People – earnestness, gorgeous musical textures, and a wide-angle cinematic feel. Five years ago Crossingham named the group after a Sea and Cake album, and has subsequently proven he is one of the few songwriters able to expand on Sam Prekop’s vision of pop music that is simultaneously ambient and infectious.

New release The North Sea isn’t the debut album from Raising The Fawn, but it is the best place to start accessing Crossingham’s worldview. It’s an enchanting collection of moody, atmospheric pop songs that culminates in two aching, epic, ten-minute tracks that ebb, crest and lap like ocean waves. The open sea is clearly an inspiration to Crossingham: he not only sings about it, but he writes songs that invariably echo its rhythms. “Gwendolyn”, the lead single, is the most conventional pop song on The North Sea – but even here, there’s something hushed and dreamy about Raising The Fawn that elevates and ennobles the project.

“Gwendolyn” is built around a mildly psychedelic bass riff – and here, as elsewhere on The North Sea, bassist Scott Remilia’s playing is powerful, precise, and fluid. Along with creative drummer Dylan Green, Remilia provides a rock-solid base for Crossingham’s delicate falsetto lead vocal. The song, a eulogy for a relative (possibly even a parent), is a gorgeous meditation on the price of distance – emotional and otherwise.

The clip for “Gwendolyn”, directed with a combination of poise and wild imagination by Christopher Mills (Modest Mouse “Float On”), is easily one of the most ambitious we’ve seen all year. It incorporates several different animation techniques and styles, and careens from image to complex image. But by no means is it a jumble – it follows its own internal and associative logic, and carries the viewer along on a wild ride through a meticulously-drawn landscape. Like Raising The Fawn’s music, it is evocative, it rewards close attention, and it threatens to seep into the dreams of those who engage with it.

The video begins with a date: March 9, 1997. We’re not told the significance of it – we’re left to wonder if it marks the foundation of the band, or of the idea of the song, or whether it relates to the title character. A young woman walks across a green football field and chances upon a kaleidoscope in the grass. When she shakes it and raises it to her eye, we’re brought inside the device, and treated to a bizarre and beautiful sequence of animated images. (Periodically during the song, the perspective shifts back to the woman in the field – just to remind us that we’re all just viewers here.)

Our tour guide through the world inside the kaleidoscope is an animated sparrow. We watch as it flits along a geometrically impossible highway, and through the streets of a manicured town – we watch the bird chased by a cat, and we see it cut through the narrow gaps between clay-animated humans. Three-dimensional animated models are juxtaposed with two-dimensional cutouts; throughout the clip, Mills plays with the expectations of depth and dimensionality. A bird carries a sleeping man far above the clouds and drops him through the canopy; Crossingham lies on a flat, brown animated surface as the air over him sparkles with life. When the video finally turns to Raising The Fawn in performance, they’re shot in stop-action motion. It’s dreamy, hallucinatory; it transports the viewer, keeping him unsettled, but always fascinated.

It is our great pleasure here at HIP to have the opportunity to work with the top notch crew at Sonic Unyon. These folks are the ones you look to if you want your music Canadian….and cool. Thanks to them, we have an ample supply of Raising The Fawn’s The North Sea discs for on-air giveaways, including some autographed discs we collected at this year’s CVC Conference (for those among you who feel as we do that this is really a video to be championed). If you need more info or would like to set up an on-air giveaway, call Andy Gesner at (732) 613-1779, or email info@HIPVideoPromo.com.