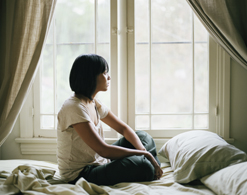 Hello music video cohorts! It’s Andy Gesner and the staff of HIP Video Promo, here to share a new clip from a talented and telegenic singer from Southern California. Fleetwood Mac’s “Dreams” has touched generation after generation of listeners; it’s the sort of timeless song that’s bound to outlast us all. The caring – but clear-headed – warning to a departing lover continues to resonate for anyone who has ever suffered through a painful break-up. Some of the many reinterpretations of the song have become pretty famous in their own right: Ryan Adams’s version is well-known, the Letters To Cleo cover is a highlight of their discography, and Stevie Nicks was sufficiently excited by the Deep Dish retooling of the song to appear on it. But we don’t think we’ve ever heard a take on “Dreams” quite as breathtaking as the one recently recorded by singer and pianist Rebecca Jordan. Stripping the song back to its rudiments, Jordan squeezes every ounce of despair, loneliness, disappointment, and stark beauty out of Fleetwood Mac’s world-famous melody and narrative.

But that’s nothing new for Jordan, who has been lighting up California stages for the past few years. Her piano playing is crisp, expressive, and delicate – the perfect accompaniment to her radiant voice. Jordan’s originals draw from classic jazz, folk, soul, Seventies singer-songwriter music, and contemporary pop; her unique mix is reminiscent of Carole King and Roberta Flack and she’s as comfortable performing a standard as she is while she’s singing a piano ballad. She’s also assembled a stunning band of L.A.-area luminaries, including cellist Jessica Catron, celebrated composer, arranger, and guitarist John Ballinger, and former Eels and Lucinda Williams drummer Jonathan “Butch” Norton on the skins. Together, they’ve become scene favorites, and they’re poised to take their sound to the rest of the nation in ’09.

Although Fleetwood Mac was a transatlantic rock group with a sound to match, “Dreams” and the entire Rumours album has become strongly associated with Los Angeles. Rebecca Jordan’s clip for her version of “Dreams” is a California reverie: unmistakably set in the hills of L.A., and heavy with the feel of haunting Tinseltown reveries. The clip fades in from a blur and disappears into one at its conclusion, and feels hazy throughout; that said, it’s handsomely filmed and attentively shot. Jordan herself dominates the video: she’s gorgeous, but her beauty isn’t imposing. Instead, she invites us into her Los Angeleno living room; it’s intimate, gauzy, and rewarding.

The video is broken into two pieces: a bright California day and an electric city night, seen from the windows of the same apartment. The simple household images communicate great loneliness and regret – a teakettle on a barren stove, a small bicycle leaning against the shuttered doors of a giant garage, a slowly dripping faucet, an empty bottle next to a heart-shaped wine-stain on a table. Once night falls, Los Angeles looks spectral and haunted: a constellation of blurry, shifting lights. Jordan sings with her head tilted upward; not accusatory or angry, simply sad, beautiful, defiant, and drunk with longing.

We’re pleased to be working with Rebecca Jordan to bring you this riveting new clip and are here to hook you up with anything you may need to assure this video receives the programming consideration it so rightly deserves. If you need more info, call Andy Gesner at 732-613-1779 or e-mail us at info@HIPVideoPromo.com.