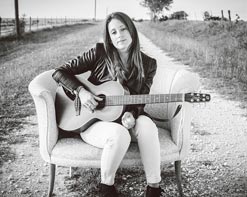 Born and raised in the tropical paradise we call Long Island, NY, a child of the eighties and nineties, Rebecca Perl announced to her family at age 13 that she would be a singer songwriter when she grew up. That’s when she decided to pick up the guitar. The pop music radio of the late ’90s carried a heavy dose of acoustic pop music, and Rebecca gravitated to that sound. This is where she first saw artists like John Mayer, Dave Matthews Band, Jewel and Michelle Branch perform live, which greatly influenced her musical tastes.

By 2012, Rebecca landed the first of many major gigs supporting Ryan Cabrera, Teddy Geiger, Tyler Hilton, Gavin Degraw, Vertical Horizon, Olivia-Newton John, Howie Day and others. All the while in 2013, she was writing new music and recording her debut album Rendezvous. Rebecca sold out The Studio at Webster Hall for the release of Rendezvous in April 2013, the album garnered great reviews from critics around the world.

Rebecca moved to Austin, Texas in September 2014 and has recently completed her second studio album, Point Of No Return marking a major event in Rebecca’s life as a songwriter and performer, leaving it all behind to start anew in the music-rich city of Austin, TX. Aside from being the Live Music Capital of The World, Rebecca could hardly resist the plethora of delicious food trucks and the quirky atmosphere of Austin. She’s gladly there to stay.

Her first single is the delightful number “Love Love Love,” which displays Rebecca’s full range of skills of crafting pop gems. The video follows the sometimes awkward process of finding love in a world of blind dates and random hook ups that don’t always go according to plan. While they weave their way through their own personal matchmaking, Rebecca is there to play the role of Cupid in disguise, subtly leading each one towards what is ultimately a better match! There’s an old saying that every relationship fails until the one that doesn’t, and through the lens of Rebecca Perl’s music we can see several of these come to fruition right before our very eyes.

It’s our distinct pleasure to be working with Rebecca and helping to spread the word about her music! She will be embarking on a tour of the Southern US in May, and we would love to get you out to see her live! Please contact Andy Gesner and the HIP Video Promo crew at (732)-613-1779 or email us at info@HIPVideoPromo.com .