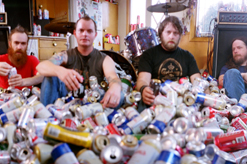 Hello dear programming friends, Andy Gesner and the HIP staff here, and we are very excited to bring you this brand new reel of videos from one of our favorite labels, Sargent House! They have scanned the map to find the best of the best and have always been on the forefront of breaking new bands, and it only seemed appropriate that we send you this six video reel to showcase all of the new talent! It includes hard rockers Red Fang with “Prehistoric Dog”.

Red Fang, a Portland based fist-pumping rock/punk super mash-up, has been on a steady incline since their first show on New Years Eve of 2006, having already shared the stage with bands including The Sword, The Melvins, The Saviours, Big Business and The Fucking Champs. They’re just coming off a two month full US tour with Clutch, then a co-headlining run with Early Man.

The band employs guitar work wrought with angles and smear it across a ten-ton low end that threatens to smash any inkling of musical insecurity. The band tears apart the sonic landscape atop an unyielding horse named groove, forcing something innovative into the realm of raucous rock. Each track on Red Fang sits like the massive boulders at Stonehenge, heavy as hell, but together completely cohesive – an impressive feat considering each member has crawled up a specialized leg of musicality via their own pursuits to reach Red Fang’s incredibly dense center of balance. It seems less and less will be able to knock Red Fang off of that medieval horse. Iann Robinson from Crave Magazine fittingly describes the band; “This is huge, epic, rock that walks into your home, drinks all your beer, fucks your girlfriend then burns the whole shit pile down before leaving. Nothing on this album is formulaic and Red Fang work hard to keep that idea alive.”

The video for “Prehistoric Dog”, directed by Whitey McConnaughy, is an excellent companion to the head-banging and beer-chugging enforcements of the self-titled album. It opens with a countdown to a tab-popping, PBR shotgun in the front seat of an old car, immediately introducing a few Dark Age constants with men in chain-mail and robes accompanied by swords and scepters in a park. The first move is made, this time by Red Fang, and it happens to be a vocal stab at an aptly named “Gandalf”, which receives a wave of middle fingers in retaliation. After chugging another few beers, the band is off to the lair to develop a strategy, build their armor and of course, drink more beer. “Prehistoric Dog” saturates the kitchen air while empty cans pile up at the band’s feet, higher and higher. The music never falters, Red Fang seemingly unaffected by the massive quantities of beer. The true purpose of the aluminum shells comes into sight as the band prepares for battle, and Red Fang finally returns to the original field, this time truly awaiting a clash of empires. They attack, the battle ensues, blood is shed and lives are given, but in the end Red Fang are the real heroes – champions of the desire to rock, and drink, evermore.

It is a bona fide pleasure to be working with Cathy Pellow, Marc Jetton and Sargent House Records to promote this action packed video. If you need more info, call Andy Gesner at 732-613-1779 or e-mail us at info@HIPVideoPromo.com. You can also visitwww.SargentHouse.com or www.RedFang.net to find out more about Red Fang.