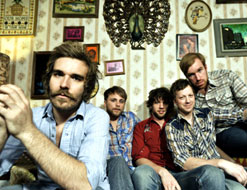 Hey there, programmers! It’s Andy Gesner and the rest of the HIP Video Promo crew, and the next video we’ve got for you just screams Americana. This comes courtesy of Red Wanting Blue and their brand new video for “Where You Wanna Go.”

The video starts off with a somber girl riding the Merry-Go-Round without purpose and Red Wanting Blue’s vintage tour bus driving to an unknown destination. The band eventually ends up in a field filled with bizarre setups; we’re talking a plastic gingerbread house and a giant pumpkin, among other vibrantly colored, adolescent props in which Red Wanting Blue amusingly plays ukuleles in front of. Front-man Scott Terry then isolates himself from the group, staring down at a photo of the girl from the Merry-Go-Round. You get a sense that she’s a piece from his past as he sings, “You can’t be in the circus if you don’t want to leave town / No destination is too far from us now / So tell me where you wanna go.” Red Wanting Blue is a band all about their next destination and, before you know it, they’re back on the road, not questioning the place they had just left.

It’s appropriate considering that Red Wanting Blue is a band that writes on the road about their various journeys. This Columbus, Ohio-based quintet have been enduring such trials and tribulations for more than 10 years, and it’s evident when places like HardRockHaven.net praise them as one of the hardest working rock bands in America. Red Wanting Blue certainly deserves such accolades, especially with eight full-length albums under their belt, seven of which were released independently.

Red Wanting Blue’s last album, These Magnificent Miles, was re-released this year under their newly signed label Fanatic Records. Here, you’ll be able to hear “Where You Wanna Go,” which is accompanied by other tracks that embody what life on the road means to Red Wanting Blue. In terms of These Magnificent Miles, The Athens Post reviewed that it “is a studio-polished gem of emotion-driven music. The guitars shimmer in the background of each track, following the direction of Terry’s voice. Solid bass lines and foot stomping percussion keep the music lively. The catchy chorus lines inspire sing-alongs, and one can almost hear applause after each song’s crescendo – The fact that this band has been touring for as long as they have lets on that they’ve figured out how to invoke this experience through their album.”

It’s our pleasure to be working with Red Wanting Blue and Fanatic Records to bring you this stellar new clip, and we can’t wait to hear what you think about their video for “Where You Wanna Go.” We’ve got copies of These Magnificent Miles to go around, and would also love to hook you up with the opportunity to catch up with the band at one of their many upcoming live shows so please don’t be shy about getting in touch! If you need more info, call Andy Gesner at 732-613-1779 or e-mail us at info@HIPVideoPromo.com. You can also visit www.RedWantingBlue.com and www.FanaticRecords.com to get more info on Red Wanting Blue.