Retribution Gospel Choir “Hide It Away” 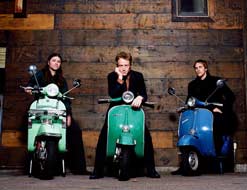 Fans of experimental rock know the ambitious Alan Sparhawk well. As the principal guitar player and songwriter in Low, he’s been making gorgeous, cinematic, passionately-performed albums for the better part of two decades. Things We Lost In The Fire, Low’s 2001 set, is now recognized as a landmark, and proof positive that “quiet” music can be just as engrossing – and just as forceful – as the heavy stuff. But there’s more to Sparhawk than Low. He’s been a participant and supporter of Duluth’s underrated independent music scene for as long as he’s been strumming a six-string. He’s sung rough-edged, dirty blues-rock in the Black Eyed Snakes. And when he wants to play infectious pop, psychedelia, dub, and drum and bass, he turns up the amplifiers and the distortion, and he hits the studio (or the road!) with the Retribution Gospel Choir.

RBG is a relatively new band – their debut dropped in 2008 – but after impressing listeners and critics alike with their self-titled debut, they’re already back with a second full-length. “Hide It Away”, the lead single from 2, neatly splits the difference between Low and Sparhawk’s latest project. The melody is pure classic pop: radio-ready and instantly memorable, soaring and irresistibly catchy. The guitars are overdriven, the drum fills are frenetic, and Sparhawk’s vocals are direct as a dart and just as sharp. But “Hide It Away” shares much of the atmospheric feel and sonic richness of Things We Lost In The Fire. Low fans worldwide – and there are many – seem certain to respond to the song’s beauty. This spring, the Retribution Gospel Choir will be taking their music to those fans, touring extensively in Spain and Italy before returning to the United States.

The tour begins – as do all things Sparhawk-related – in Duluth. The stark and hilly northern city has always inspired Alan Sparhawk’s writing, so it’s no surprise that the hypnotic clip for “Hide It Away” was shot on the misty shores of Lake Superior. The members of Retribution Gospel Choir drag a box across the sand – and judging by the shovels they’re toting, they mean to bury it. During fleeting shots, the musicians wear masks; then, just as quickly, their faces are uncovered. Alan Sparhawk sings as his bandmates work, peering out over the top of a sand pile. Shovelfuls of red sand fly through the air as he shouts out the words of “Hide It Away” to the camera. The effect implies that the frontman is getting buried alive – but there’s no indication that he’s uncomfortable at all. On the contrary: when Retribution Gospel Choir finally drops their box into the hole, they do so with an unmistakable air of satisfaction. What’s in there, we’ll never know – but with a band like Retribution Gospel Choir, the mystery is half of the chase.

This band has been on our radar for quite some time now and we’re very excited that Sub Pop has given us the opportunity to be a part of the team. If you need more info, call Andy Gesner at 732-613-1779 or e-mail us at info@HIPVideoPromo.com . You can also visit www.SubPop.com to find out more about Retribution Gospel Choir.