Rhett May "Cocktails and Cannabis" 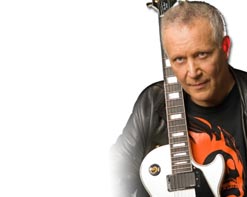 Rhett May owes his rare musical sound and style to the unique environment that he grew up in. Born in Calcutta, India, he was immersed in a magical, musical melting pot. Carnatic and Hindustani music and instruments such as the Sitar and Tabla always providing melody and percussion against a daily backdrop of lifting and soaring voices of Ragas. By the time Rhett had begun boarding school in the Himalayan foothills; western music had also begun an invasion. His major musical influences were John Lennon for his wit and humility, and Freddie Mercury for being a visionary and showman. Both broke new musical ground, and Rhett is determined to follow in their footsteps by writing and recording songs that people just love.

After leaving India Rhett moved to the land of Oz, more specifically Melbourne, Australia. He further honed his craft over the years by performing in The Wooly Bully’s, one of Australia’s most buzzed about bands, and spent many years opening arena shows nationwide. Now May is back with a new EP, Insatiable. Few, if any songwriters and musicians could grow up in such a perfect time and place of musical menagerie and translate it into an accessible and exciting collection of songs, but Rhett May is just that man.

“Cocktails and Cannabis” is one of his most popular songs, with over 2.2 million views on YouTube to date. Taking its cue from the the album namesake, the “Cocktails and Cannabis” video is truly insatiable. The video is a sexually charged ode to some of the most widely practiced and appreciated vices. There are three distinct and equally tempting elements to the video. First there is the absolutely stunning girls, with one dynamic blonde in particular. Their sultry looks and sexy curves are enough to turn any man into putty in their hands. If you can get past that, we are also treated to a healthy dosage of inebriating options of mixed drinks and hard liquors. Lastly is the psychedelic ode to the whacky weed, the Mary Jane, the green seed, or whatever you want to call it. With wardrobes reminiscent of the Haight Ashbury era, the tokers in this clip are living the high life. Put it all together and it’s a decadent delight that all of us can appreciate and envy (even the most PG of us).

We are always thrilled to be working with international artists who help expand our musical horizons, and Rhett May is like no other we’ve worked with before! We would love to get you on board with the “Cocktails and Cannabis” video, so please contact Andy Gesner and the HIP Video Promo staff at (732)-613-1779 or email us at info@HIPVideoPromo.com for more info on Rhett May.