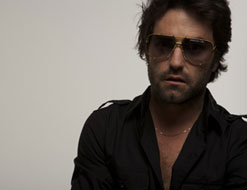 Greetings music lovers of the programming world! It’s Andy Gesner here with the HIP crew to bring you a song and video that is as elating as it is exciting. Ringside is ready to get right back into the fight with their fantastic new single “Lost Days,” a song that has Ringside waltzing gracefully and delicately while delivering a sound that is punchy, hooking the listener in right from the chime of the first chord.

In the initial swelling moments of “Lost Days,” one can hear the attention Ringside applies to their craft. In fact, one of the things that is never “lost” in “Lost Days” is tonality. From the airy whimpering slide guitar, the smoky crunch of the intro riff and the graceful light rasp of vocals warming the mix, it is easy to notice Ringside has made a huge investment in attention to detail, to ensure that the listener is entranced in the same atmosphere as the mind of the song’s humble creators. Lamenting days gone by in ignorant darkness, Ringside singer/songwriter/producer Scott Thomas relays the regret of not breathing in life with the hungry deep inhalations he now does, which is instantly relatable to any listener. However, despite the tear jerking lyrics, having the song flow in a major key is magnificently uplifting and induces a sense of peace, masterfully resolving this emotional roller coaster. This song rocks like Achtung Baby era U2 with a much more intimate and warm sounding approach.

Ringside know their strength lies in song and do not distract from its purpose with their equally cozy video. The clip features footage of the group performing the song in a live studio setting with cuts to moody skies. It is important to note that despite the intentional simplicity of the video, this video is stylistically shot, allowing to the viewer to feel as though he or she is fly in the room circling from member to member, landing on every shiny instrument that reflects back in a welcoming glow. Although a simple insect might overlook this fact, “Lost Days” features Grammy-winning artist Ben Harper on vocals and slide guitar, and is co-produced by actor/beat maker Balthazar Getty (known for his roles in Natural Born Killers, Lost Highway, and Brothers & Sisters).

Ringside are no rookies when it comes to rock and roll. The band achieved a fair amount of success with their self-titled debut album released with the help of Limp Bizkit’s Fred Durst and Flawless/Geffen Records, selling tens of thousands of copies worldwide. The single “Tired of Being Sorry” had an impact in the airwaves and was even covered by Enrique Iglesias, which was also a hit single in Europe. The follow up, “Struggle,” was featured in a Pontiac commercial and on the soundtrack for the blockbuster movie “Doom.” Ringside are now set to conquer even more territory with the outstanding “Lost Days” off their new album of the same name, coming in January 2011.

We are thrilled to bring you Ringside, a band that is as fresh as they are seasoned. We have plenty of copies of Lost Daysfloating around for any giveaway, and personal listening needs that you may have. Just shoot us a line and we will have them right over to you! If you need more info, call Andy Gesner at 732-613-1779 or e-mail us at info@HIPVideoPromo.com. You can also visit www.ringsidemusic.com to get more info on Ringside.