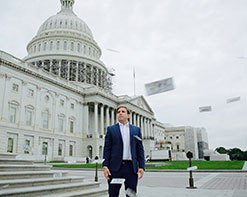 Rio Tazewell has been a social entrepreneur and organizer for political change for more than 10 years. At 29, he has helped launch multiple organizations confronting issues of the 21st century on the local, state and national level. Most recently, in his current role fighting an out-of-balance political system in Washington, he is incorporating a passion he has been quietly developing since childhood, his music.

His debut music video, a rap song titled #realtalk, explores the relationship between money in politics, corporate lobbyists and the need for a political revolution. Filmed on Capitol Hill, the video features scenes from a large rally and protest in DC, known as the “Democracy Awakening”, with thousands of people taking to the streets demanding reforms to money in politics. Rio was one of the core organizers of the Democracy Awakening, and was central in coordinating the more than 300 organizations that participated in the event.

In his video Tazewell wisely lets the imagery of Democracy Awakening underscore his arguments — as he raps about the power of collective action to shape America’s destiny, he shows citizens of all kinds, united in their desire to take back power from wealthy special interests. But the stealth star of this video is Washington, DC itself. The Capitol, the Supreme Court, the Reflecting Pool, the Washington and Jefferson Monuments, inside the Hart Senate Office Building, Union station and even the DC Metro are shown in their glory — all of them reminders in white marble of our collective legacy, and the ideals we’re fighting to preserve.

While his lyricism dates back beyond his time as an organizer and activist, #realtalk marks Rio’s first full foray into the realm of music… with this fiery hip-hop protest song that speaks to the modern zeitgeist in American politics, and the need for genuine change. Far from being one and done, he has a mixtape in the works with more material ready to record and release, which he hopes to move forward with soon following the launch and promotion of #realtalk. He sees his music as a personal way to reflect his professional message, mission and vision… that of building an inclusive movement for a modern democracy befitting of the 21st century. In his day job as a campaign manager at People For the American Way, a progressive advocacy organization in DC, Rio works tirelessly to advance the ideals expressed in #realtalk.

We are very excited to be working with such a unique artist and to help spread the sound of this powerful voice; a voice that speaks directly to the political reality we’re all currently ensconced in. With any luck, we’ll be seeing more music from him soon. Rio is available for interviews and drops so let us know if you’d like to get your hands on one! Please contact Andy Gesner and the HIP Video Promo team at (732)-613-1779, email us at info@HIPVideoPromo.com.