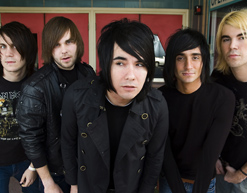 ROOKIE OF THE YEAR

Hello cherished music video programmers! It’s Andy Gesner and the staff from HIP Video Promo bringing you a new clip from one of the hottest young bands around. Rookie of the Year began as a solo project for the winning Ryan Dunson, and his warm, melodic, and empathetic songwriting remains the band’s calling-card. But the former Farewell To Fashion frontman is alone no longer: he’s relocated to Fayetteville, and assembled a band of talented musicians whose sensibilities suit his expressive balladry. The Goodnight Moon is their latest effort, and it has won them accolades from hipsters and critics alike.

The growing popularity of the album has also made the band a sought-after live attraction. Rookie of the Year have shared bills with Cute Is What We Aim For, The Rocket Summer, This Day & Age, and many other like-minded pop-rock bands; this June, the North Carolina quintet opened for Gym Class Heroes, and wowed their sold-out crowd. Dunson and ROTY have earned a reputation for generous, dynamic concert performances, and they’ve kept to the road for the better part of 2007. This autumn, they’re touring America with Secondhand Serenade and Permanent ME, and surely won’t slow down during what promises to be a hectic 2008.

The Goodnight Moon shows off all facets of Rookie of the Year: Dunson’s irresistible pop craftsmanship, tight multi-part harmonies, Mike Kamerman and Brandon Schade’s powerful twin-guitar attack, clever musical accents, and impassioned, lovelorn lyrics. It also sounds terrific: Matt Malpass’ production is lush and sparkling, and teases out every ounce of emotion from Dunson’s voice. Comparisons to The Juliana Theory, The Early November, and even The Goo Goo Dolls are all warranted, but for every delightful and straightforward pop track on The Goodnight Moon, there’s another where the band takes surprising chances. “Live Fast, Fall Now” is a dazzling electronic excursion, “The Weekend” a winsome piano ballad, and “Pop Destroyed The Scene” is all handclaps, crashing acoustic guitar, and a melody straight out of the classic-rock playbook.

But “Liars And Battlelines” is the album’s centerpiece and most representative track. It’s sweet, aching, and painfully honest – but it contains reserves of complexity, too. Dunson’s narrative chronicles the hard feelings during a breakup, but the language he uses is regretful, reflective, and even complicit. Much of that ambiguity is preserved in the thoughtful and subtle clip for “Liars And Battlelines”. Superficially, the clip examines a typical wild house party, complete with a living-room performance by Rookie of the Year – but just under the surface, there’s trouble brewing.

This is territory that directors Andrew Tomayko and Ryan Wehner know well: Wehner’s clip for Asteria’s “A Lesson In Charades” is a similar slice of suburban street-drama. The “Liars And Battlelines” video gets tremendous mileage out of a tricky bit of time-travel – upon waking alone in a typical suburban house, Ryan Dunson encounters himself on the staircase leading to the second floor. His mirror image is moving backward, led back from the bedroom and into a party scene by a goodlooking young woman. The festivities run backward for awhile too; then Dunson catches up with the action, and the rest of the clip unfolds sequentially. As the members of Rookie of the Year play on stairway landings and sofas, Dunson watches himself brood on a couch, flirt with the girl from a distance, and, ultimately, lead her away from another suitor. The party feels oddly impersonal: shadows obscure many of the attendees, and many of the frames intentionally cut off the heads of bystanders. Finally, the girl leads the frontman up to his room, but when the sun comes up, she’s the one alone in bed. She looks for Dunson and doesn’t find him – just as the clip comes to a close.

We want to thank our pal Brad Fischetti and the good folks at One Eleven Records for bringing us on board to be a part of the Rookie of the Year promotional team. They’ve set us up with copies of The Goodnight Moon for your on-air giveaway needs, so hit us up if you’d like a few copies or if you’d like to catch the band for a video interview when they are in your town. If you need more info, call Andy Gesner at 732-613-1779 or e-mail us at info@hipvideopromo.com. You can also visitwww.111Records.com,to find out more about Rookie of the Year.