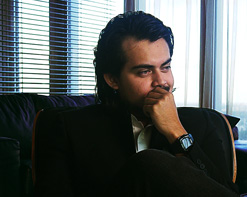 Rossemberg Maza is an Cross-genre artist that has meticulously crafted his own galaxy within the EDM Universe at a blistering rate. He is now revisiting his roots in the RnB spectrum. Born and raised in Villahermosa, Mexico, Maza attended university overseas in Lancaster, Lancashire, UK. The move allowed him to understand two walks of life, inspiring him to pave a third path all for himself.

Maza released his first album Through It All in 2015, arming him with a rock solid platform to launch masterful and calculated hits. His last single, “A Bad Guy”, served as the emotional follow up to Through It All, asking self-reflective questions and providing a sneak peak into the inner-workings of the artist. His new single, “Eat It Too (Cake)” builds off of the honesty of “A Bad Guy” by exposing a day in the grandiose life of Rossemberg Maza: various time zones, exotic cars, and of course, beautiful women.

The “Eat It Too (Cake)” video opens up just like any other day for the 21st century king, walking off a plane. Maza arrives in Amsterdam and meets up with a couple friends, but he can’t seem to shake someone off his mind… In fact, he can’t seem to shake a multitude of women off his mind. Sorting through each girl in the verses, he realizes that he simply can’t choose just one. Sometimes, the truth is a hard pill to swallow, and Maza knows it’s wrong of him to want all these women to himself. He doesn’t want to hurt anyone, but what’s the point of living if you’re not honest with yourself? Waking up early, racking his brain, the answer comes to him in his hotel room. Call it a weakness, call it a strength, but one thing is certain: Rossemberg Maza is a man who’s “gotta have his cake and eat it too.”

We’re profoundly thrilled to be working with an artist in command of his own world, Rossemberg Maza. It’s our sincere hope that you and your viewers will flock to “Eat It Too”, share it on your socials, and add it to your programming in a timely fashion. Rest assured we will have plenty of outstanding Rossemberg Maza merch to set up online/on-air contests and giveaways throughout the campaign. Don’t hesitate to let us know what we can do to help you spread the importance of Rossemberg Maza. Please contact Andy Gesner and the HIP Video Promo team at (732)-613-1779, email us at info@HIPVideoPromo.com. You can also visit www.Facebook.com/RossembergMazaofficial for more info on Rossemberg Maza.

For info about other Rossemberg Maza music videos, click HERE