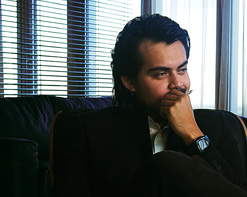 Over the past several years, electronic dance music has made its way from an underground, niche genre to a culture and universe of its own. Rossemberg Maza grew up in Villahermosa, Mexico but moved to Lancaster, Lancashire, UK for university. While living in Europe has allowed him to submerge himself into the world of EDM, “Villahermosa still represents safety and creativity.”

Maza released his first album Through It All in 2015; while the songs were strong, the album set the stage for a more mature and meticulously crafted follow-up. His new single, “A Bad Guy”, “is the follow up in terms of emotion.” A trip to Tokyo and a love of concept albums like The Beatles’ Sgt. Pepper’s found him exploring and embracing new ideas, and he thought to himself, “What if I am the bad guy?”, and soon enough, the lyrics were written.

Like a true bad guy, the video for “A Bad Guy” is intentionally complicated and left open for interpretation, though he “put a safe line to keep it entertaining.” Filmed in Vienna and an idyllic small town in Austria with supermodel Victoria Karner as his co-star, the scenery is picturesque. Yet throughout, Karner struggles to decide whether to be cautious or “just give it all and see what happens.” The video is simple and elegant, but the end features a shocking finale.

The song may be called “A Bad Guy”, but Rossemberg Maza’s music is sure to be a good time. We’re ecstatic to be partnering with this promising artist, and we’d love to see this video added to your regular programming! If there’s anything we can do to make that happen, please don’t hesitate to contact Andy Gesner and the HIP Video Promo team at (732)-613-1779, email us at info@HIPVideoPromo.com or visit https://rmz.bandzoogle.com/ for more info on Rossemberg Maza.