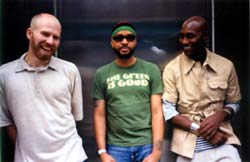 Hi, everybody! It’s Andy Gesner and the staff from HIP Video Promo, back with another startling clip from an emerging band generating buzz in the NYC environs. Get ready for Roughstars – a heady hybrid of American soul, hip-hop, bright, flashy eighties R&B, urban blues, and classic punk. The Brooklyn-based trio (hailing from Ft.Greene / Bed Stuy) has been opening eyes on both sides of the pond, winning converts from both “garages”: the U.K. dance movement and the American back-to-basics partisans. Here’s is an act supple enough to bridge the Atlantic.

Roughstars, the debut album, brims over with musical ideas. Lars has an expansive beat vocabulary and a battery of wild synthesizers, and he assembles his rhythms and tones in bewildering, ever-shifting patterns. Vocalists Vito and Bullet Brown are alternately sweet-soulful and aggressive, taking turns on the microphone with easy assurance. Some songs owe as much to “Clash City Rockers” as they do to “Rock Box,” while the slow jams are reminiscent of Basehead as well as Maxinquaye. Blues elements pop up all over the album – raw guitar, rudimentary electric piano, scratchy harmonica. Roughstars sound fully modern, but these guys know their history.

Similarly, the clip for “Letter In Blue” blends the warmth and comfort of the familiar with the hard gleam of the cutting edge. It appears to have been shot in extremely herky-jerky stop-action motion – but it wasn’t. It’s actually thousands of separate digital photographs, presented one after another in chronological sequence. The result?, a giant digital flip-book of a day in the life of Roughstars, and one of the most visually captivating videos we’ve seen so far this year

The video opens with grainy footage of a New York bridge in blue A.M. light. The scrawled lyrics of the song are then superimposed over a shot of a hand making chords on an acoustic guitar. But when the beats kick in, the hypercharged slide show begins: one shot after another, shown at dizzying speed. We see the Roughstars studio – records to sample from, a spaghetti bowl of quarter inch cables, mixers, fingers on synth keys. We watch the trio get dressed – a sweater, a loose-slung tie, a jaunty vintage Baltimore Orioles cap. They check themselves in the mirror, and they hit the morning pavement; later, as the sun rises higher in the sky, we see them hanging together on a typical brownstone stoop. As daylight ebbs into twilight, we follow them across the bridge, and to a nightclub where they’re playing. Microphones held loosely in their hands, they pace the stage restlessly, penned in by the crowd, the bank of synthesizers, and the huge monitors.

New York City landmarks dot the clip. All three Manhattan-to-Brooklyn bridges make appearances, as does the Lenox Lounge and Junior’s Restaurant. There’s an unmistakably Gothamite feel to all of the images: even the sidewalks look like New York sidewalks. Roughstars and director Jory Hull play the town like an instrument – lights flash on and off in apartment buildings to the stuttering rhythm of the drums

We are so excited to work with this awesome “rock n’ bounce” outfit from across the Manhattan Bridge. Whenever we can help unearth a criminally overlooked genre meshing extravaganza like Roughstars, we are all about it! If you need more copies of the engaging Roughstars CDs for on-air giveaways, please don’t hesitate to get in touch. For more info call Andy Gesner at 732-613-1779, or email info@HIPVideoPromo.com.