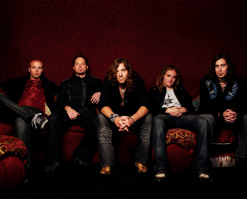 Hello programming community! It’s Andy Gesner and the staff from HIP Video Promo, back with a clip from a group that has overcome immense hardship, confounded all doubters, and re-established itself as one of the premiere acts in heavy rock. The last two releases from Royal Bliss were both called After The Chaos, and that’s not posturing – the so-called “unluckiest band in rock” has had more than their share of misfortune. Charismatic frontman Neal Middleton was told by doctors he’d be permanently paralyzed after plummeting thirty-five feet from a balcony. Guitarist Chris Harding needed surgery after a terrible skiing accident; his six-string partner Taylor Richards broke his foot and was unable to walk. Car accidents, road mishaps, addictions, and interpersonal problems have haunted the group, but the musicians fought through their injuries – both physical and emotional – toward full recuperation. More importantly, they never stopped rocking.

So inspiring is the Royal Bliss comeback story that it occasionally threatens to eclipse the band’s real achievements: these guys aren’t victims, they’re accomplished rock and roll champs. The pain in their music is real, but so are the moments of transcendent glory. So let’s concentrate on the positive – Royal Bliss has toured across the country, built an enthusiastic national fanbase, and shared bills with Flyleaf, the Smashing Pumpkins, Buckcherry, P.O.D., and many other top-shelf hard rock bands. Despite its independent recording and release, After The Chaos sold thousands of copies, scaled the Mediabase charts, and launched songs into heavy rotation on commercial radio stations. And as always, Royal Bliss backed up their success with scalding live performances, including several earth-shaking sellout shows in their hometown of Salt Lake City.

Life In-Between, their latest set, distills all the trouble and triumph into twelve thunderous tracks. Middleton is confessional: he sings frankly about his challenges, the demons that haunt him, and the crushing despair that so often accompanies feelings of helplessness. “Save Me”, the lead single, is a plea for deliverance from the ravages of drug dependence. It’s also a kickass hard rock single – distorted guitars, stinging snare, tight harmonies, and an instantly-memorable chorus. The track has already become a concert favorite, and is sure to be a prominent part of the Royal Bliss set when they embark on another national tour this autumn.

The evocative clip for “Save Me” doesn’t feature any of the members of Royal Bliss – but it does show viewers a walking personification of Neil Middleton’s tormented psyche. The “star” of the video is a puppet-headed human form with a smooth and impassive face; through skillful editing and clever camera-work, his movements are made halting and deliberate, like a marionette untethered. He lives alone in the desert, and only occasionally ventures out of his humble home. At times, he’s buried up to his waist in the sand outside; at other moments, he’s got enough self-possession to stroke his tabby cat and flip ruefully through old photo books. The entire clip is rendered against a background that resembles crumpled paper or worn leather; it imparts an intimate texture to a clip that already feels emotionally raw. Soaked in sunset reds and desert grays, the “Save Me” video is gorgeous, artistic, and compulsively watchable.

We are stoked to be working with the crew at Merovingian Music to champion the new clip from Royal Bliss. We also have a stock of new their new CD Life In-Between and the “Save Me” single for all your contest and on-air giveaway needs, so don’t hesitate to get in touch! If you need more info, call Andy Gesner at 732-613-1779 or e-mail us atinfo@HIPVideoPromo.com . You can also visit www.MerovingianMusic.com or www.RoyalBliss.com to find out more about Royal Bliss.