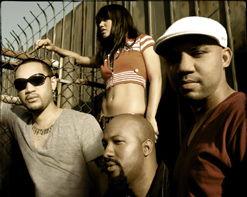 Check it out music video brethren! It’s Andy Gesner and the staff from HIP Video Promo, hoping you’re having an exciting summer so far. We’re about to stir things up further by sending you the clip for Rue Melo’s propulsive “Check It” – a slice of infectious, rock-edged R&B delivered by an immediately appealing vocalist. The young singer has lived in California, The Bronx, and Paris, and she speaks (and performs) in French and Spanish as well as English. But there’s nothing esoteric about her music: her beats are fresh, her grooves are near-unstoppable, and her lyrics go straight for the gut.

There’s nothing canned about it, either. Rue Melo’s terrific band plays all of her songs live, and makes radio-ready dance music with actual bass, drums, Latin percussion, and acoustic and electric guitars. Melo’s backing group makes her songs feel more organic than much of contemporary R&B, and also imparts some uncommon spontaneity and stagecraft to her recordings. Rue Melo, the debut, is a surprising and rewarding listen, incorporating elements of Latin music, hip-hop, garage rock, and even European song into the mixes. The introduction of a Spanish-speaking rapper might suddenly turn a track from a booty-shaker to a street banger; drummer Idris al-Mutazz Tate, guitarist Martin Estrada, and bassist Bryan Bush demonstrate their fluency in many styles; and Rue Melo herself slips easily from Francais (“Tomber”) to Espanol (“Con Alma Y Corazon”, “Enamorada”) and right back to English. The whole thing feels like the best kind of party in the best kind of city – the sort of get-together that features wild romance, urban energy, unexpected guests, new experiences, and a hostess who’ll stop at nothing to keep the good times going strong.

Since Rue Melo and her trio can move the dancefloor without needing to resort to any studio trickery (again, something rare in modern R&B), they’ve become an in-demand concert attraction. Her studio efforts have been just as celebrated. After “Fallen” – the powerful mid-tempo ballad that serves as the centerpiece of Rue Melo – was featured during the pivotal scene of an episode of The L Word, internet chat boards were crammed with writers asking about the identity of the singer, and wondering where they could get a copy of the song. “Check It”, the lead single, is one of the most propulsive cuts on the set: it’s highly Latin-inflected R&B, and Melo delivers it with the attitude and assurance that is the hallmark of multiplatinum-selling recording artists.

Yet although she’s a star in the making, there’s still something approachable and identifiable about Rue Melo. As the “Check It” video demonstrates, she’s very sexy – but there’s an around-the-way-girl quality to her stance and her image that’s both refreshing and alluring. The clip gives us plenty of Rue Melo to admire, and although she’s young, she already knows how to work the camera. But she’s no puppet girl: she’s more interested in horsing around with her bandmates and establishing her personality than she is in shaking her tush for the camera. We watch Rue Melo, her group, and several friends on a joyride; together, they break into an abandoned warehouse and set up their instruments there, and perform together. She’s got more on her mind than music, though: midway through the clip, the winsome singer produces a basketball, passes it to her bandmate, and proceeds to hang with the big boys on the indoor court.

We’re very excited to be working with our new friends at Fighter Records to bring you this scintillating video from an exciting young artist. We’ll have plenty of copies of Rue Melo to meet all of your giveaway needs, so definitely give us a shout to get your hands on some copies. If you need more info, call Andy Gesner at 732-613-1779 or e-mail us at info@HIPVideoPromo.com. You can also visit www.FighterRecords.com to find out more about Rue Melo.