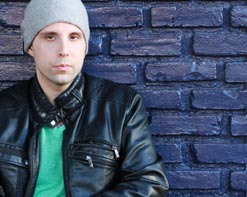 When we first introduced Ryan Aderréy to viewers and music fans through his video “A Miracle, My Love” it was immediately apparent that he was an artist that was a dynamic performer with an inherent knack for pop music. His skills, his style, and his attention to detail all come together into one undeniable dose of pop music goodness. The single landed deep in the Billboard indicator and pop charts, and was a taste of the depth and diversity of the What If EP, which saw Ryan team up with Grammy winning producer Zach Ziskin. For his next offering, he presents to us “Without Hope.”

The video for “Without Hope” follows the tumultuous story of a young daughter caught in the midst of her family and her life crumbling around her. Chloe Dolandis, who also provides the female vocals in the song, plays the lead role as she witnesses her parents’ relationship imploding in front of her and the world she thought she knew becoming more distant with every passing minute. She runs away from home in NY and heads up to Boston, but her problems are still not far behind. Fortunately for her, Ryan is ever present in her shadow throughout the video and like a guardian over her shoulder he’s there to remind her that there is a better way.

By addressing the matter head-on and without pulling any punches, “Without Hope” tackles the difficult and sensitive subject of depression and suicide. But more importantly, it is also a powerful reminder that even in the darkest days of life that there is always help, and it is often just a phone call away. After the conclusion of the video we get a further look into Ryan Aderréy’s conscience with the important inclusion of the National Suicide Prevention Lifeline. We sincerely hope that you will share this video far and wide, it may ultimately save someone’s life.

Here at HIP we are proud to help Ryan Aderréy share such an important message and help create a deeper awareness. Please contact Andy Gesner and the HIP Video Promo crew at (732)-613-1779 or email us at info@HIPVideoPromo.com.