Saint Bernadette “In The Time Of Moses” & “Close Enough For Me” 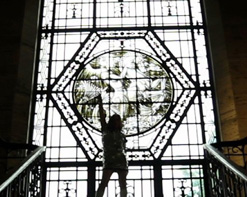 For those about to rock, we’ve got a video that will fit your cannons quite nicely. It’s Andy Gesner and the HIP Video Promo staff, here with a rock band inspired by loud volumes, cheap whiskey and, both, heaven and hell. Feel free to choose sides and make peace with your past as Saint Bernadette prepare to take on the apocalypse in “In The Time of Moses.” We’ve also included a more intimate and acoustic track from the band, titled “Close Enough for Me.”

Fronted by femme fatale vocalist, Meredith DiMenna, Saint Bernadette perform super-heated, 70’s inspired, powerhouse rock and roll, employing catchy melodies, soaring harmonies and rhythms heavy enough to force the savage to the surface of any civilized soul. With a broad palette and colorful appetite for absolutely every form of music, Meredith has been compared to an impossibly diverse list of power females like Shirley Bassey, Peggy Lee, Johnette Napolitano, Joni Mitchell, Joan Jett, Beth Gibbons, Grace Slick, Velma Kelly, as well as the occasional man, like Robert Plant, Greg Dulli, and Jim Morrison. Just as the real Saint Bernadette changed the future of her hometown of Lourdes forever with her unexplained visions, Saint Bernadette, the rock band, is poised to put their homebase of Bridgeport, in the ill-considered state of Connecticut, on the independent music map with their fierce and unapologetic sound. The band has already picked up some serious media attention on their road to glory. The New York Times raves about Saint Bernadette and DiMenna, describing her as “Grace Slick-meets-Edie Brickell vocals at their most haunting.” All Music Guide calls the band’s sound full of “intense yet lithe charms.” Metromix simple states: “Meredith DiMenna is a monster of a front woman.“ The band has also been highlighted by Harp Magazine, My Old Kentucky Blog, Sentimentalist Magazine and more. Like any ferocious and hungry wild rocker outfit, Saint Bernadette makes their hardest impact playing live. This is why the group is spending this fall touring the country in support of their release.

“In The Time of Moses” is a riotous and rambunctious collision of heaven and hell from the band’s latest album The Nevers. The clip follows along with the churchly theme of the band’s name, featuring the band members dressed up as Satan, Jesus and Moses. While the guys in the band are busy playing their unholy roles, Meredith grabs the front woman role by the horns as she performs in front of an awe inspiring stained glass window in fearless fashion. The clip also features footage of the notorious “End Times” movement as well as Michelle Bachman and Rick Perry, who consort and pray with the folks who are preaching the end of the world. With the election around the corner, this clip makes a prominent statement and could not be more relevant!

We have also included a very intimate and stripped down number from Saint Bernadette entitled “Close Enough for Me.” This song is the polar opposite of its predecessor, as Meredith shares a more fragile side of her voice. This track will show how truly beautiful the set of pipes this singer possesses are, as she can be very clearly heard without the walls of amps behind her. The video also takes a very bare bones approach, allowing the viewer to focus on the song. The clip only has two subjects: Meredith lying in bed with just the camera on her face and a dog being walked on a leash, all edited with an “aged film” effect.

We are stoked to bring you a band that isn’t afraid to get loud and then let you in on their most personal secrets. We love it when a band just embraces the savagery of rock, and Saint Bernadette does just that. Let us know if you’re interested in setting up an interview with Saint Bernadette while they are on tour and near you. We’ve also got copies of The Nevers for giveaways and contests, if you want them. If you need more info, call Andy Gesner at 732-613-1779 or e-mail us atinfo@HIPVideoPromo.com . You can also visit www.saintbernadettemusic.com to find out more about Saint Bernadette.