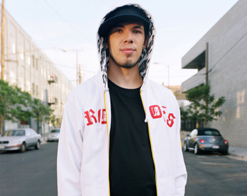 Hello friends in the music video world! It’s Andy Gesner and the staff from HIP Video Promo, here to introduce you to a new, boundary-shaking act fronted by a charismatic performer with a familiar name. It would be disingenuous not to mention Salvador Santana’s lineage: he’s the son of the undisputed titan of Latin rock and Latin jazz. By the time he was fifteen years old, he’d already collaborated with dad Carlos on a Grammy-winning track from Supernatural. But just as Santana – the group – was always more than just a vehicle for the groundbreaking guitarist that lent the act his name, the Salvador Santana Band is a true multi-genre, multi-ethnic combo.

Drummer Tony Austin has been entertaining audiences for two decades – he’s played wigged-out funk with Erykah Badu, bopped with Billy Higgins, improvised with The Monterey Jazz Festival All-Star Big Band, and swung with countless other talents in pop and jazz. Singer (and occasional TV actor) Quincy McCrary is a well-known face around Los Angeles; he’s performed with Quetzal, Burning Star, and put out several recordings under his own name. Guitarist Woody Alpanalp has studied with jazz legend Charlie Haden, gigged with African music pioneer Thomas Mapfumo and the incomparable Lauryn Hill, and toured the world with soul superstar Bobby Womack. Multi-instrumentalist Jose “Crunchy” Espinosa is a former member of the unclassifiable, politically-charged Ozomatli (furthering that connection, Asdru Sierra, a founding member of Ozomatli, guests on the Salvador Santana Band debut to electrifying effect.)

But no matter how much wattage he’s surrounded himself with, singer-rapper-pianist Salvador Santana is the star of this show. It’s his vision that animates SSB, his voice that harmonizes this kaleidoscope of styles, and his varied musical tastes that color this wildly entertaining set. SSB is a brilliant amalgam of contemporary R&B, hip-hop, salsa, radio pop, Latin jazz, psychedelic music, and even classic rock. Carlos Santana makes an appearance on SSB; it’s a breathtaking collaboration, but it also serves to illustrate that these young musicians can hold their own with a Rock and Roll Hall of Famer. Yes, they’re that good.

While many tracks on SSB are experimental and unrepentantly adventurous, “Summer’s Day” is a track made for hit radio. Co-written with DJ Nu-Mark of Jurassic 5, the cut boasts a slamming beat, an irresistible chorus, and a magnetic performance from Salvador Santana. The clip for “Summer’s Day” – a whimsical combination of Flash-style animation and live performance footage – feels as sunny and delightful as the song. Salvador Santana and the band drive their van through a cartoon California, tracing red lines on the map from San Francisco to Los Angeles. The SSB plays their song against a Flash backdrop, alternately performing on the streets of an animated Hollywood and the rooftops of a crisply-drawn Alcatraz. There’s a woman he’s after, too, and she’s no cartoon either. She’s the one who grabs the red lines that the band van is tracing and pulls them taut – and in so doing, she manages to draw the two California cities together as if she’s stitching up a knot.

We want to extend our sincere appreciation to Andy Valdez and the crew at Tsunami Entertainment for allowing us to be a part of this music video promotion. They’ve hooked us up with a plethora of SSB for your on-air giveaway needs. So, if you’d like to get your hands on some, or if you would like to catch up with the Salvador Santana Band for a video interview when they are in your market, please drop us a line. The band will be touring all Spring, including several shows at this year’sSXSW Festival in Austin, TX. If you need more info, call Andy Gesner at 732-613-1779 or e-mail us at info@HIPVideoPromo.com . You can also visit www.SalvadorSantana.com to find out more about the Salvador Santana Band.