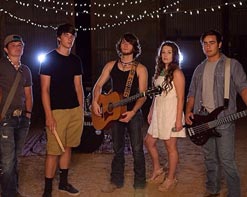 San Texas Bound is a small town Acoustic Rock band from Palacios, Texas consisting of Ernie Aparicio on lead guitar/rhythm guitar/lead vocals, Madeline Aparicio on lead vocals, David Aparicio on bass guitar, Steffan Kruse on rhythm guitar and Sam Schulman on drums. The band’s musical genre is a dreamy rock sound done with all acoustic guitars which ends up sounding like Texas country. The first studio album Dreams consists of 8 songs written by Ernie and David Aparicio that channels their wide variety of influences like Days of the New, Taylor Swift, and Fleetwood Mac. Needless to say, this band has a little something for everyone.

Songwriting came very natural to the guitarist and bassist, so they wrote multiple songs about love and loss. Ernie’s sister Maddy came into the picture in his garage when he wanted to see what the music would sound like with a female singing too. David ended up recording the siblings doing a demo of Almost Feels like a Dream and then posted it to Facebook. This led to much local attention along with Jay Guerrero offering to record a demo for the band. This was the official beginning of STB leading to small gigs and more local attention. With the profit from the gigs and the demos sold, the band got together their very own sound system including a drum set, but lacked a drummer. Donna and Alan Schulman of “Something Else” (two strong supporters of San Texas Bound) mentioned to them that their son Sam was more than willing fill the drum position. With long hours of practice and many small town gigs the band decided they needed to get serious and step into the national conversation, and with their new single “Better Off That Way” they’ve entered with a voice that will not go unheard.

Their “Better Off That Way” video captures all of the youthful inspiration and attitude of San Texas Bound along with a veteran approach to creating a compelling and captivating storyline. Accompanied by a San Texas Bound performance footage the video follows the budding romance of a young Texas couple as they engage in lots of the activities we’d expect in the beautiful Lone Star State. Driving around in an old pick up truck, enjoying the beautiful summer days with a relaxing moment in the tall grass, gorgeous sunsets, and capping it all off with a night of dancing in the barn accompanied by San Texas Bound themselves. It’s a perfect encapsulation of the San Texas Bound aesthetic and we think this will be a real hit with you and your viewers.

San Texas Bound has drive and determination, along with strong work ethics, to catapult their love of music to the heavens. We are incredibly proud to be a part of their promotional team. Please don’t hesitate at all to get in touch with us and let us know what you need to include “Better Off That Way” in your programming. Please contact Andy Gesner and the HIP Video Promo team at (732) 613-1779 or email us at info@HIPVideoPromo.com for more info.