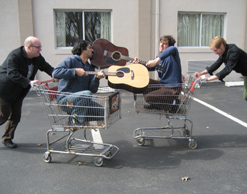 Hello music video friends, it’s Andy Gesner and the staff from HIP Video Promo. Straight from Chicago’s fertile power-pop underground come The Saps – a band heralded in the Windy City and much of the Midwest, and soon to be loved by the rest of the country. Dan Lastick’s clever and artful songwriting will surely make it so; he’s the sort of rare pop-rock craftsman who sends music aficionados and record-collectors into fits of obsessive glee. But while Lastick’s songs are tuneful and sharply-constructed, there’s nothing careful or precious about The Saps. This quartet can play it rough when they want to, and their performances radiate an engaging looseness and feeling of camaraderie. Take The Shins, give ‘em a good shaking and something strong to drink, and you’ve have a pretty good idea of the kind of pop mania The Saps can generate in concert.

Their records are similarly festive. Finally, A Band You Can Trust, their debut, has become a Chicagoland legend: it’s a collection of tuneful pop songs pulsing with aggressive punk rock energy. The followup C’mon Already – Start A Fire is even better, combining tight pop melodies, Beatlesque harmonies, wiry six-string, frantic tempos and, when necessary, sheer rock and roll abandon. Critics from far beyond the borders of Illinois have been lining up to give it praise. Spinnamed The Saps their Artist of the Day and suggested that C’mon Already sounded “as if Wilco recorded A.M. on a sugar high and proceeded to invite Stephen Malkmus over for a havoc-wreaking play-date.” USA Today called the band “promising and catchy”; Amplifier reported that “this is what all your favorite bands sounded like before they got too old to care”. Most everyone has lauded the lyrics: Lastick is a funny guy. He’s also capable of singing persuasively – and often movingly – about taking a date to a porn flick (“Cicero”), fishing (“Tight Lines”), talking to ghosts (“Dead Friends”), his fears about getting sick (“Hospital”), and much more. The producers of MTV’s The Real World loves the band’s irreverence – they’ve selected no fewer than four songs from C’mon Already – Start A Fire to air during the program.

“Coup De Grace” is one of those songs. The lead track and lead single from C’mon Already – Start A Fire is an irresistible pop number with a passionate vocal by Lastick and chorus that’ll stick like chewing-gum to your brain. The song earned The Saps a feature in CMJ.COM’s “Download This” section, and it’s the subject of Jeff Hadick’s humorous and offbeat video. The “Coup De Grace” spot is, strictly speaking, a performance clip – but what happens during that performance is, to put it mildly, highly unusual. Hadick’s camera catches Dan Lastick on stage with a motley group of musicians; you don’t have to be a Windy City rock expert to realize that these aren’t The Saps. Midway through the first verse, a rush of water pours down from between the frontman’s legs. He’s brought backstage on a gurney, where, under doctor’s supervision, he gives “birth” to his bandmates (all fully-grown, of course), and, for good measure, a six-pack of beer. He shakes their hands and sends them out on to the stage; once he’s done, he picks up his own instrument and joins them there.

We’re more stoked than ever to be partnering with Mark Zelasko and the entire Saps team to bring you this lighthearted video that brings a smile to our faces each and every time we see it! Please be sure to reach out to us if we can set you up with copies of their disc, C’mon Already – Start A Fire. We have plenty on hand for on air giveaways and contests that we’re confident your viewers would love to get a hold of. If you need more info, call Andy Gesner at 732-613-1779 or e-mail us atinfo@HIPVideoPromo.com . You can also visit www.TheSaps.com to find out more about The Saps.