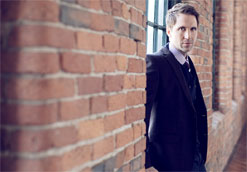 Early autumn is the best time of the year to be in New York City. The air is crisp and clear, the streets are humming with activity, and romantic possibilities are everywhere. If you’re lucky enough to experience this for yourself, you know exactly what we’re talking about. If you’re too far out of town to catch the magic, Scott Gray’s gorgeous video for “Raincoats” might be the next best thing. In the clip, Gray searches for love and adventure on a beautiful day in New York. He doesn’t have to look far. It’s all around him.

And sometimes it takes an out-of-towner to truly appreciate the city. Gray isn’t a New York artist – like many true believers in the art of musical storytelling, he makes his home in Nashville, Tennessee. But his jazz-pop songs, all of which emphasize narrative, often echo New York voices, including confessional singers like Leonard Cohen, Laura Nyro, Billy Joel, and Norah Jones. He draws from older Gothamite sources too: musical theater, film soundtracks, the smoky, after-hours sound of the speakeasy.

All of that is present on Raincoats & Other Short Stories, a warm, engrossing set that showcases his skills – he’s an excellent tunesmith, arranger, and lyricist, and he’s an empathetic and instantly likable singer, too. The six songs on Raincoats are thoughtful and grown-up in their romantic outlook (as all short stories should be), but they’re also as splashy, catchy, and melodically sophisticated as any modern pop. “Raincoats” is a timeless tale of flirtation, seduction, and gratification deferred, but it’s also grounded in the present by deftly-chosen specifics – a Burberry coat, a Christian Dior dress, the fall of rain outside an apartment window. Gray decorates the track with bouncy piano and high chimes, and bathes his chorus in radiant brass.

Gray’s prior video for the slinky “Maybe It’s You” was also shot in New York City. That one was a trip through Manhattan after hours – the city illuminated by the neon glow of Midtown. “Raincoats”, by contrast, is a daytime story. Gray sings from a pier by the Brooklyn Bridge, and walks through the parks by the East River, pausing from time to time to take in the scenery. And because “Raincoats” nods so emphatically to Broadway and old movies, there’s a dance sequence, complete with umbrellas, right in front of a mural so bright that no cloud could possibly dampen its colors.

It’s quite the pleasure to be working with Scott Gray once again to share the video for “Raincoats.” We hope you embrace this clip and consider adding it to your regular programming and online presentations! Rest assured we’ll have plenty of Scott Gray merch available for on-air contests and giveaways, so get in touch if you’re keen to receive some. For more information on Scott Gray please contact Andy Gesner and the HIP Video Promo team at (732)-613-1779 or email us at info@HIPVideoPromo.com. You can also check out www.ScottGrayMusic.com for more information.

For info about other Scott Gray videos, click HERE.