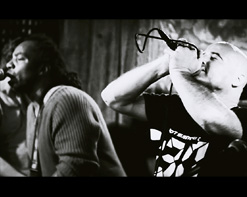 It’s not every day that we get to work with legends here at HIP HQ. However, today we have a special surprise for you, programming brothers and sisters! It’s Andy Gesner and the HIP crew with the return of D.C. hardcore punk staple Scream. Their new video for “Elevate” proves they’re not one bit tired or toned down since their formation in 1981 and can still throw one hell of a riot!

If you’re unfamiliar with this legendary outfit, let us fill you in. Scream are considered one of the benchmark bands in the history of the Washington, D.C. hardcore music movement. Along with bands like as Minor Threat and Government Issue, Scream ultimately helped forge the attributes of the movement, which were blinding speed, heavy political and social connotations in the lyrics, unpretentiousness of attitude, and shunning of commercialism. The band was the first group to release a full length record on the punk label Dischord. After their third album, Scream enrolled Foo Fighters frontman and Nirvana drummer Dave Grohl, who toured with the band extensively and appears on two of their albums before they disbanded in 1990. Scream guitarist Franz Stahl was also a member of the Foo Fighters for two years.

After nearly 30 years since first emerging from the D.C. nascent punk underground, Scream has returned with the release of Complete Control Sessions. A seven song EP recorded live in Dave Grohl’s Studio 606 this past February (with John Lousteau and Scream behind the board), it picks up where the band left off. Known for their incendiary live shows, urgent mix of punk, Bad Brains/Clash-inspired dub, and rock-and-roll swagger, the original lineup of vocalist Pete Stahl, guitarist Franz Stahl, bassist Skeeter Thompson, drummer Kent Stax and newcomer guitarist Clint Walsh come out swinging–with nary a hint of the two decades that have passed since last hearing from them.

“Elevate” is true to form: hitting hard and loud. The fact that the song was recorded live gives it that extra bit of fervor that is usually missing from punk recordings and can only be witnessed at shows. The video was filmed on location at one of the band’s reunion gigs and is filled to the brim with rowdy and crowd surfing fans. For an extra bit of nostalgia and star power, Dave Grohl pops into the frame occasionally to sing along with the rest of the frenzied fans. If you’ve never attended a sweaty punk rock engagement, this will get you pretty close to the real thing.

We thank the SideOneDummy team for bringing us this important moment in connecting the genre’s history with the present. We’ve got copies of Scream’s new EP Complete Control Sessions for you to check out, so hit us up for copies. If you need more info, call Andy Gesner at 732-613-1779 or e-mail us at info@HIPVideoPromo.com. You can also visitwww.SideOneDummy.com to find out more about Scream.